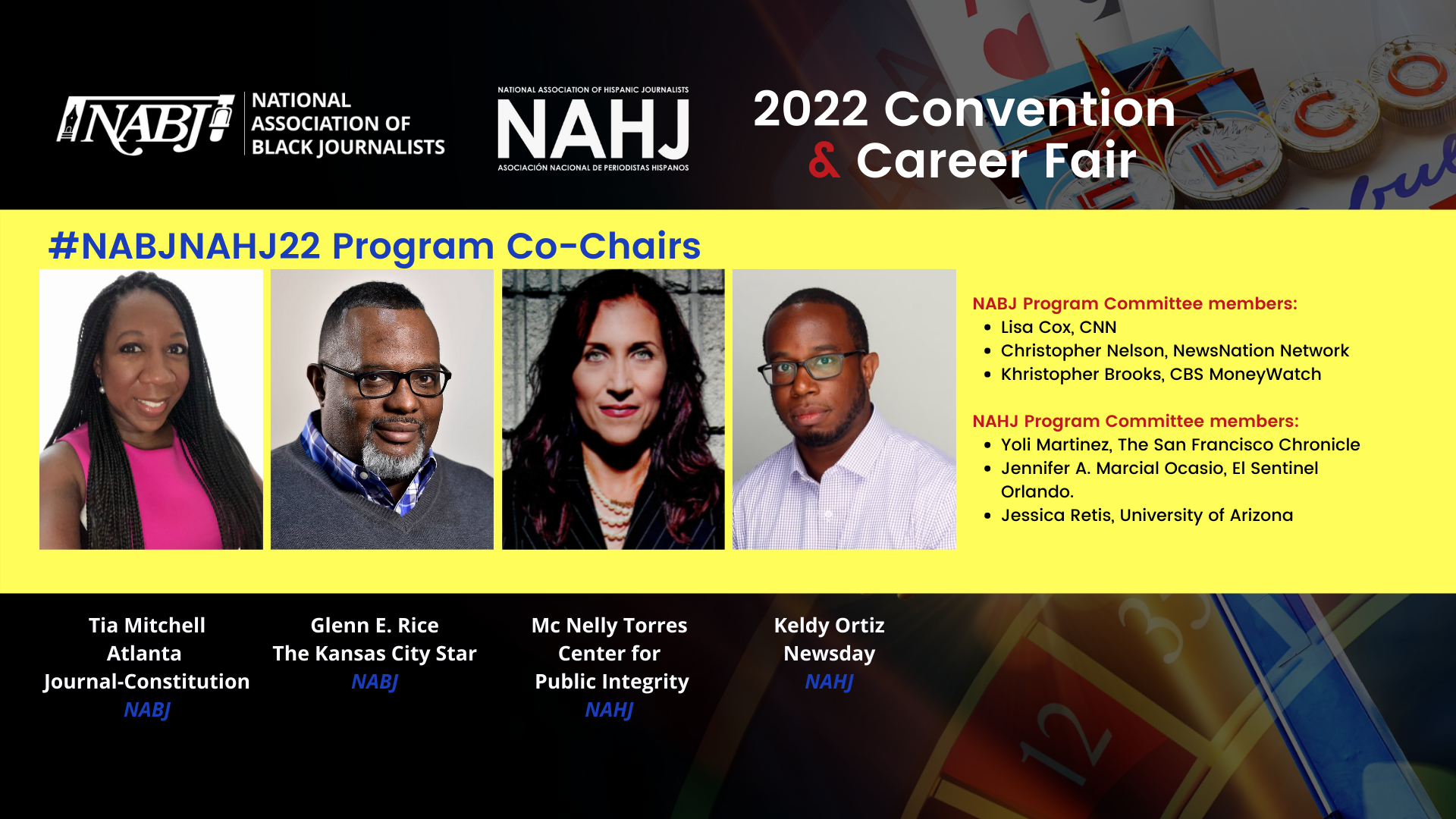 The National Association of Black Journalists (NABJ) and the National Association of Hispanic Journalists (NAHJ) today announced the selection of the program chairs and committee members for the upcoming joint 2022 Convention & Career Fair. The #NABJNAHJ22 Convention is scheduled to be held August 3-7, 2022 in Las Vegas, pending health guidelines.

The program chairs and committees play a critical role in reviewing and selecting member-submitted session and workshop proposals, and work on session content strategy and development in conjunction with the organizations’ Boards and staff. Both NABJ and NAHJ will announce their respective call for convention session proposals in the coming weeks.

“We are grateful for our members who are lending their time and talents to help us develop a unique and timely roster of sessions and workshops to meet the needs of our attendees in 2022. Our volunteers, staff and Boards are already working diligently to ensure the convention is jam-packed with relevant and impactful programming that will energize, empower and enlighten our members,” said NABJ President Dorothy Tucker and NAHJ President Nora López in a joint statement.

The program teams include:

Tia Mitchell is the Washington correspondent for The Atlanta Journal-Constitution, covering national politics for a Georgia audience. She is frequently tapped to provide political expertise on CNN, MSNBC, FiveThirtyEight, NPR, and other national news programs. Prior to joining the AJC, Mitchell spent her career in Florida with the Tampa Bay Times and The Florida Times-Union newspapers, where she covered local, state and national politics. Since 2019, Mitchell has served as chairwoman of NABJ’s Political Task Force. She is also active in her local NABJ chapter, the Washington Association of Black Journalists, and a member of the Washington Press Club Foundation Board. Mitchell is an active member of Delta Sigma Theta Sorority and a lifetime member of the Florida A&M University (FAMU) National Alumni Association. She graduated from FAMU in 2001 with a bachelor of science degree in journalism. Mitchell is originally from Louisville, Kentucky.

Glenn E. Rice has been a reporter for The Kansas City Star since 1988. He is currently a breaking news reporter and accountability reporter covering law enforcement and the legal system. Rice served as the national Treasurer for NABJ from 1999 to 2003. Before that, Rice served two terms as Region 8 Director, which consisted of NABJ affiliate chapters in Missouri, Kansas, Minnesota, Nebraska, and Iowa. In addition to that, Rice has co-chaired the NABJ Elections Committee. During his 33 years as an NABJ member, Rice has also served on the following committees: Print Task Force, Finance, Print Short Course, and Convention Program. He also served multiple terms as the President of the Kansas City (Missouri) Association of Black Journalists. Over a span of 25 years, Rice has coordinated the group’s annual Urban Student Journalism Academy for high school and college students. The program works to identify, train and provide scholarships to students interested in journalism.

Mc Nelly Torres is an award-winning, investigative journalist and editor at the Center for Public Integrity. Previously, Torres worked as an investigative producer for NBC6 in Miami. In 2010, Torres co-founded the Florida Center for Investigative Reporting (FCIR.org). Her consumer stories at the Sun-Sentinel won state, regional, and national awards. Her work for the San Antonio Express-News contributed to the conviction of a school building architect accused of bribery. In South Carolina, she garnered local and state awards for her investigative work on the state’s hog farm permitting process. Torres was the first Latina to be elected to the Investigative Reporters and Editors Board, where she served from 2008-2014. She’s currently serving on the national board of the National Association of Hispanic Journalists as General At-large Officer. Torres received a degree in journalism with a minor in political science from the University of Southern Colorado and a liberal arts degree from the University of Hawaii.

Keldy Ortiz is a general assignment reporter at Newsday and is the NAHJ Financial Officer. Ortiz also co-chairs the NAHJ Afro Latino Task Force. Ortiz was an assistant adjunct professor at Columbia University’s Graduate School of Journalism, where he received a master’s degree in journalism. Ortiz previously worked at NorthJersey.com and The Record in New Jersey. Before becoming the Financial Officer for NAHJ, Ortiz served in several positions at the NAHJ New York City chapter including as President.