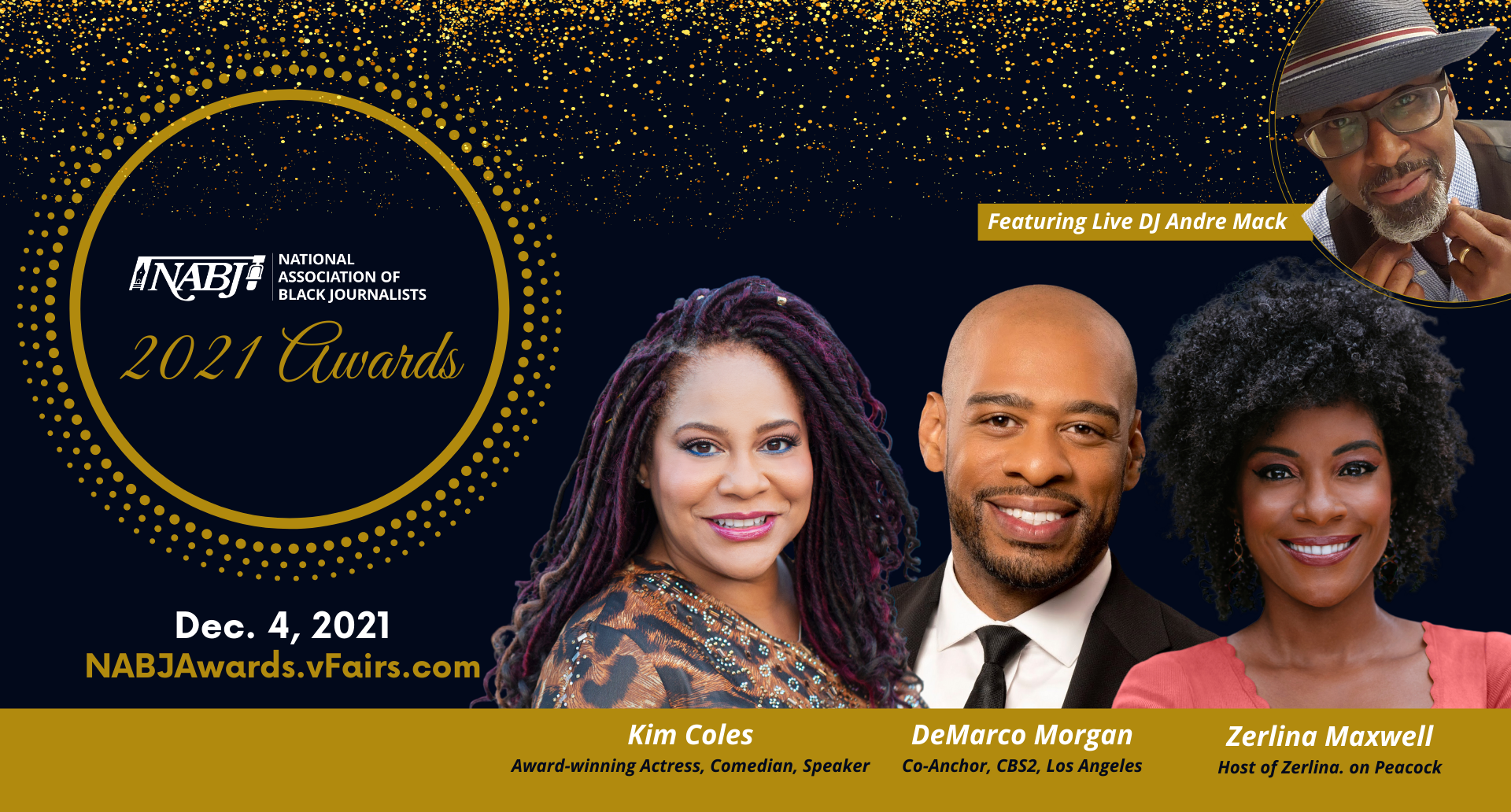 The National Association of Black Journalists (NABJ) is gearing up to salute the impact and excellence of Black journalists and communicators during its virtual awards ceremony on Saturday, December 4, 2021.

Joining the celebration will be three phenomenal, award-winning hosts and television personalities, who will present awards to NABJ’s 2021 Hall of Fame inductees, Special Honors recipients, and Salute to Excellence winners. The emcees for the evening will be Kim Coles (Actress, Comedian, Speaker), Zerlina Maxwell (Host of Zerlina. on The Choice from MSNBC on Peacock) and DeMarco Morgan (Co-Anchor, CBS2, Los Angeles). Joining the trio later in the evening, and back by popular demand, will be celebrity DJ Andre Mack, who will host the after-party and provide live entertainment. The event will also pay tribute to Black journalists and communicators who’ve passed over the last year.

The pre-event reception, which will also include awards announcements, begins at 7:30 p.m. ET; the awards ceremony begins at 8 p.m. ET; and the after-party begins at 10 p.m. ET. Tickets for the event are free to all NABJ members and the general public. They can be reserved at nabjawards.vfairs.com. Follow the event on social media using #NABJAwards.

The awards ceremony is presented by FedEx and sponsored by Caesars Entertainment.

Award-winning actress, comedian, speaker, host, and coach Kim Coles has a showbiz career that has spanned over 36 years, including roles as “Synclaire” in FOX’s ground-breaking comedy series, Living Single and other shows like In Living Color, One on One, Ten Items or Less, Frasier, and HBO’s Six Feet Under. Coles is also passionate about coaching entrepreneurs, business owners, and leaders on the incredible power of mining their own Signature Story & Life Lessons to captivate and connect with their customers, clients and the world. With humor and heart, through speaking engagements and workshops, both in-person and online, Coles teaches others to empower, educate and entertain so they can “Broadcast Your Brilliance,” and make a bigger impact and income. Coles is a four-time, best-selling author and has traveled the globe sharing love and laughter.

Zerlina Maxwell is the host of the Peacock original news show Zerlina., which delivers timely coverage of politics and current events through in-depth conversations that draw back the curtain on their real-world consequences. Maxwell, known for her clear, relatable, and insightful commentary, worked previously as a field organizer for the Barack Obama campaign and director of progressive media for the Hillary Clinton campaign. A survivor of sexual assault, Maxwell is passionate about educating people, especially young adults, about sexual abuse, domestic violence, and victim-blaming ⁠— and is a frequent speaker at colleges, universities, and organizations. Maxwell is also head of progressive programming for SiriusXM, the co-host of the award-winning Sirius XM show Signal Boost, and a regular contributor to MSNBC. Maxwell is the author of “The End of White Politics: How to Heal Our Liberal Divide.” She has a law degree from Rutgers Law School – Newark and a Bachelor’s in International Relations from Tufts University.

DeMarco Morgan is co-anchor of CBS2’s (CBS Los Angeles) weekday newscasts. Since joining CBS, Morgan has reported for all CBS News broadcasts and platforms. In 2017, he field-anchored the network’s coverage of Hurricane Harvey live from Houston for THE CBS EVENING NEWS. He also reported live from the field on the devastation caused by Hurricanes Irma and Florence. Morgan has covered stories ranging from destructive wildfires in California to the deadly Las Vegas mass shooting. He also filed live reports, for nearly all CBS News platforms, from both the RNC and DNC 2016 political conventions. He has been honored with several awards, including the Thurgood Marshall Prestige Award and EBONY Magazine’s Top 30 Future Young Leaders of America. Morgan graduated from Jackson State University, where he received a Bachelor of Science in Liberal Arts. He earned a Master’s degree in journalism from Columbia University.