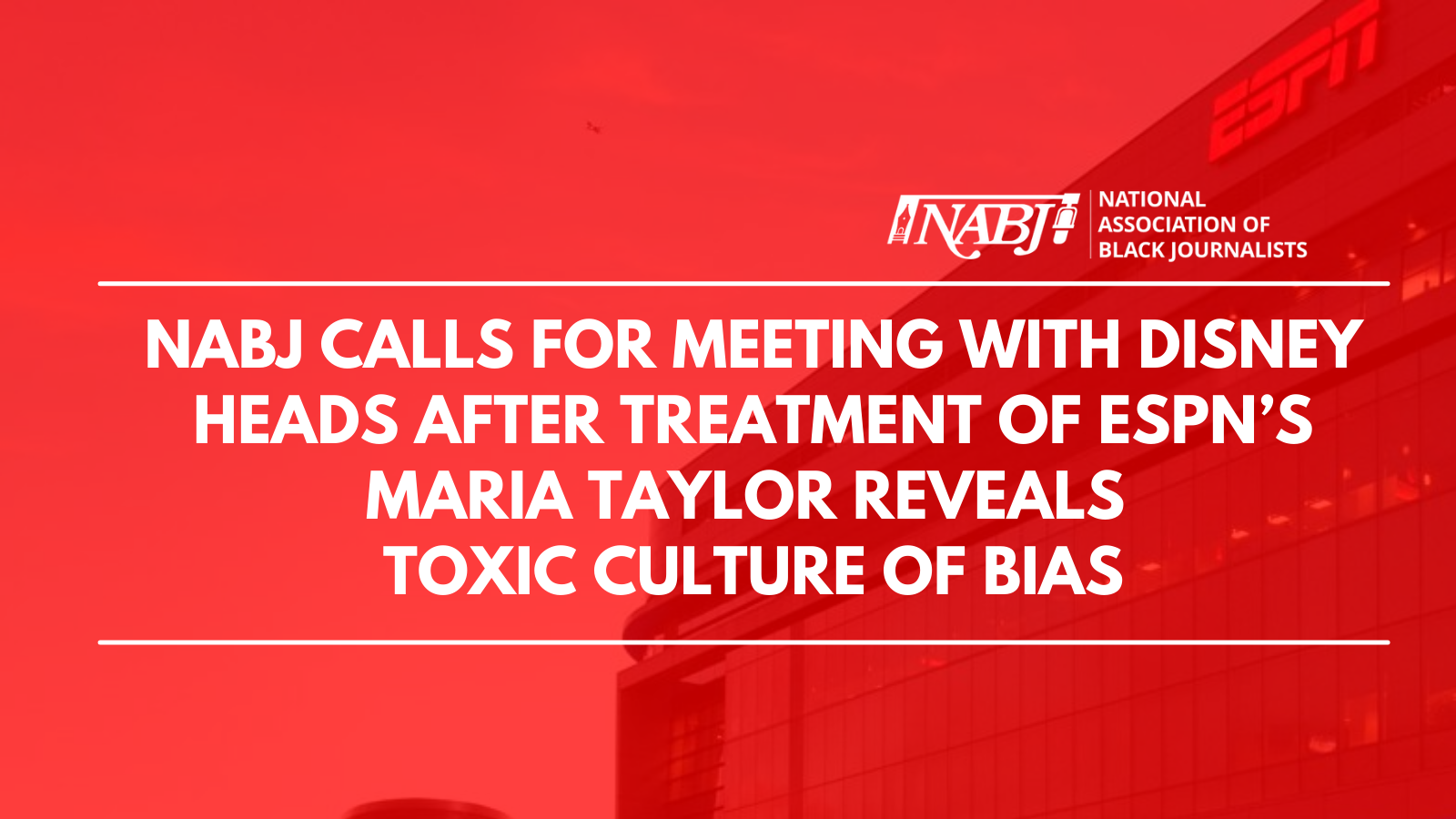 The National Association of Black Journalists (NABJ) is outraged to read reports in The New York Times and other publications that uncover a toxic ESPN culture that appears to promote bias.

According to the Times, a white sideline reporter and host of “The Jump,” Rachel Nichols, was recorded inferring that Maria Taylor, a qualified, talented Black journalist, analyst, and host of “NBA Countdown,” was only in her position because ESPN was “feeling pressure about (its) crappy longtime record on diversity.” Nichols issued an apology earlier this week and yesterday it was announced that her role as NBA Finals sideline reporter was given to Malika Andrews, who is Black.Nichols’ comments and the actions that followed over the last year were not only disappointing but disparaging given the ongoing reports by Black journalists of white men advancing at ESPN because of their skin tone and not by merit. ESPN’s response to the matter was even more appalling, as the Times has documented what appears to be an attempt by ESPN to sweep the matter under the rug until it was recently exposed in greater detail. The company’s actions could have alienated Taylor and left another Black employee punished for exposing the matter.

According to some reports, the last time the matter was addressed on record was in a statement ESPN issued to Yahoo Sports in July 2020 that did not address the racial insensitivity on display: “We are extremely disappointed about the leak of a private conversation. It’s indefensible and an intrusion on Rachel’s privacy. As for the substance of the conversation, it is not reflective of our decision-making on staffing assignments for the NBA, which has largely been driven by the circumstances of the pandemic.”

“The NABJ Board of Directors is disturbed to learn the details of this situation and what appeared to be a lack of accountability and a desire by ESPN to provide accommodations for a white employee who mocked diversity and a well-qualified co-worker while seemingly ignoring how Taylor and others who later heard the conversation may have been affected,” said NABJ President Dorothy Tucker. “The silence and apparent inaction by ESPN leaders over the last year is deafening and, as a result, NABJ is requesting a meeting with Bob Iger, executive chairman at The Walt Disney Company, which owns ESPN; Bob Chapek, CEO of The Walt Disney Company; and Jimmy Pitaro, chairman of ESPN.”

ESPN issued the following statement to NABJ but did not directly address Nichols’ behavior and the subsequent fallout.

“We’re proud to lead the sports media industry in making significant progress to develop and place diverse talent on-air and in key leadership positions,” a spokesperson said. “Diversity, Inclusion and Equity are top priorities at ESPN. We recognize more work needs to be done, and we will continue our commitment to creating a culture that reflects our values. Our partnership with NABJ is an integral part of that commitment.”

NABJ looks forward to meeting with top leaders at the company to present our concerns, demand answers and change at ESPN.