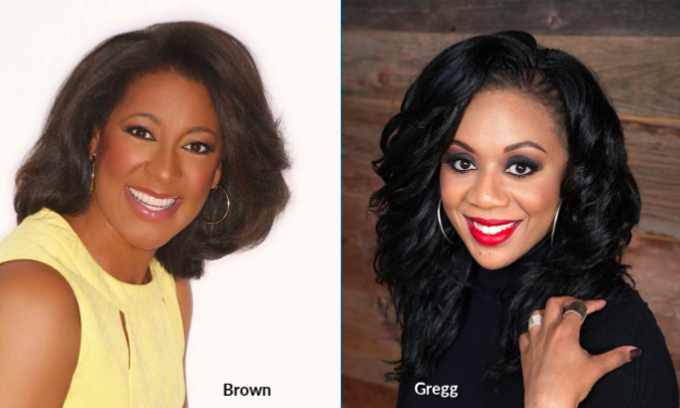 The National Association of Black Journalists (NABJ) has named Syb Brown, Ph.D., and Cherri Gregg, Esq., as its co-chairs for the #NABJNAHJ20 Convention & Career Fair.

The Convention will be held jointly with the National Association of Hispanic Journalists (NAHJ), July 8-12, 2020, in Washington, D.C., at the Washington Marriott Wardman Park.

Registration is now open at NABJNAHJConvention.com.

“These two phenomenal women have made profound impacts not only at all levels of NABJ but throughout their respective careers. I am thrilled to have them as our chairs,” said NABJ President Dorothy Tucker. “Their commitment and passion for our organization along with their diverse experiences across the media industry and beyond will help to make the 2020 convention one for the record books.”

Brown is a professor of journalism at Belmont University in Nashville, Tennessee and the author of “Innovate: Lessons from the Underground Railroad.”

“It is always an honor to serve NABJ in any capacity,” said Brown. “To be appointed as a 2020 NABJ Convention co-chair and to work with NAHJ at such a historic time is beyond amazing. This is a great opportunity to put journalism on the front page as we continue to fight for press freedom. We also need to prepare members for the ever-changing media landscape and I look forward to working with all participants. As I think about 2020, it is the year of vision, victory and values. Thank you, President Tucker, for giving me the chance to lead in this capacity.”

Gregg is the community affairs reporter for KYW NewsRadio and often files stories for CBS 3 in Philadelphia, Pennsylvania. She is also a licensed attorney.

“This year is a critical one in America for a variety of reasons, so I am truly honored to be selected to co-chair the 2020 NABJ-NAHJ joint convention,” said Gregg. “It will be extremely important that journalists of color are tuned in, connected and prepared to cover history and I know this convention will be a pivotal part of that. I look forward to being in my hometown of Washington, D.C., and working with the planning team to help to make this convention one of impact.”

With degrees from Vanderbilt University, Loyola University of Chicago and Marquette University, Brown has more than 20 years of television news experience with stints at ABC in Milwaukee, CBS in Chicago and CBS in Nashville. She helped to establish the New Century Journalism Program at Belmont and is respected in the industry as a multimedia maven.

An NABJ member since 1989, Brown served as the program chair for the 2011 National Convention. She has also served NABJ’s Region III as a program chair since 2017 and as a member of the planning committee since 2009. She was honored with Region III’s “Achiever Award” as a result of her many contributions. Brown is also a founding member of NABJ’s Digital Journalism Task Force and was named the 2015 NABJ Educator of the Year. She is a longtime digital media presenter and panelist at the national and regional levels and has served as coordinator of the NABJ Nashville Digital Media Institute.

Cherri Gregg reports on a variety of public affairs and social justice issues.

Also a longtime NABJ member, she is the past president of the Philadelphia Association of Black Journalists (PABJ). She previously served as PABJ’s vice president of broadcast and as the organization’s parliamentarian from 2010 through 2012. She is the recipient of two NABJ Salute to Excellence Awards for radio investigative reporting and podcasting and was named among PABJ’s 2019 Journalists of the Year.

Holding a law degree, she provides analysis and extensive coverage on many highly-publicized community legal issues. As an award-winning journalist, Gregg is committed to “highlighting diverse perspectives, positive people and cultural events in the greater Philadelphia area.” Among her most notable stories, Gregg spent months covering Pennsylvania’s voter ID law, provided legal analysis on the Affordable Care Act, and traveled to Washington, D.C., to cover the 57th Presidential Inauguration. She has a bachelor’s degree from Boston University, a J.D. from Howard University School of Law and an M.J. from Temple University’s College of Communications and Theater. She is a member of the Pennsylvania and Georgia Bars.