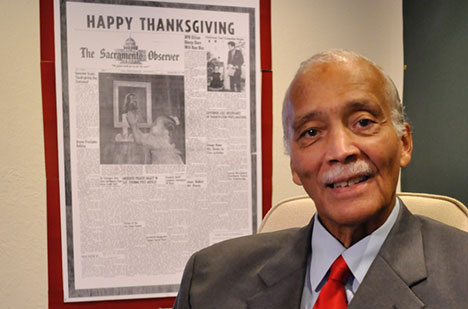 The National Association of Black Journalists (NABJ) celebrates the life of William H. Lee, Ph.D., a longtime advocate for black journalists and co-founder and publisher of the Sacramento Observer, who passed on Sept. 22. Lee was a champion for ensuring that black media professionals have equal access as members of the working press.

He also founded Lee Publishing, which, according to the Sentinel News Service, saw rapid growth in the ‘70s and ‘80s, publishing in Los Angeles, Sacramento, San Francisco, Solano County, Stockton and in Reno, Nevada. According to its website, The Observer was named the No. 1 Black newspaper in the nation at least six times and was awarded the John B. Russwurm trophy under Lee’s leadership.

From 1970-1989, Lee was an officer and board of directors member of the National Newspaper Publishers Association (NNPA), also known as the Black Press USA. He also co-founded and served as president of the West Coast Black Publishers Association, which named him “Publisher of the Year” in 1985. In 1987, Lee also served on the jury for judging Pulitzer Prize winners in journalism.

Sacramento Magazine named Lee one of the “50 Most Powerful Leaders” in the city in 2006. Lee’s other honors and awards include the Lifetime Achievement Award from the California Black Chamber of Commerce and the Sacramento Chapter of The Links; The Observer’s induction into the Sacramento Metro Chamber of Commerce’s Hall of Fame in 2012; the D.D. Mattocks Award from the NAACP; the American Leadership Forum Exemplary Leader Award; the Congressman Bob Matsui Award; and the Mort Friedman Legacy Award. The William H. Lee College Prep school is named in his honor.