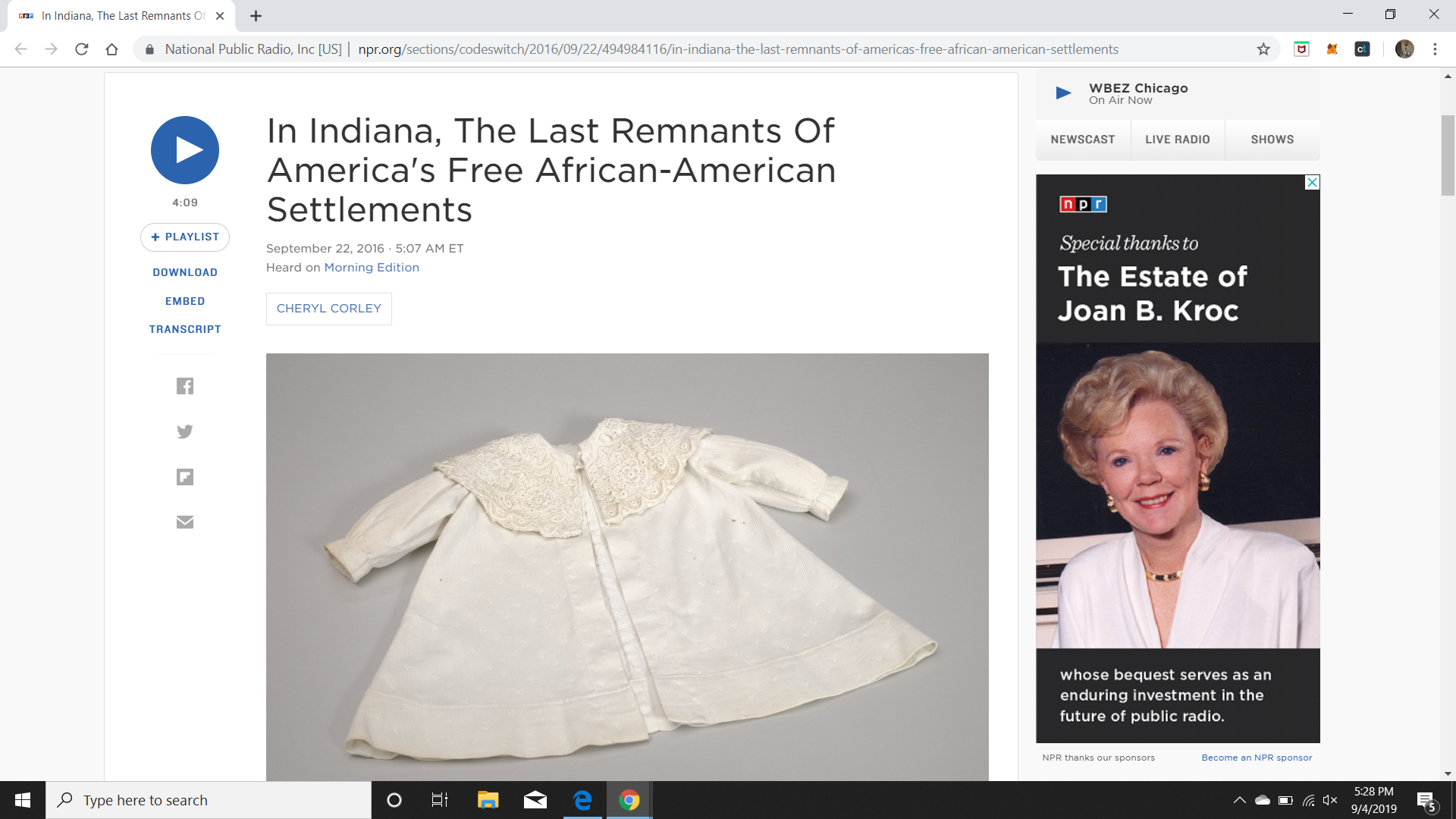 Wearing overalls and a John Deere baseball cap, 79-year-old Norman Greer stands on the front porch of his home, looking out at his property. There’s a grain bin, some tractors, a barn, and rows of corn and soy beans.

“Where I live, right here, is 52 acres, and I farm 300 acres,” Greer says. He’s also raised hogs and cattle, but as he points out vacant animal pens, he says, “I’ve gotten too old to fool with it.”

The Greer property is in Lyles Station, a little-known farming community in Indiana where free African-Americans began buying land in the 1800s. The hundreds of acres of farmland Greer’s grandfather bought in 1855 is among the oldest in the community.

Beginning Saturday, Lyles Station will be one of the regions featured in the “Power of Place” exhibition when the Smithsonian opens its National Museum of African American History and Culture on the National Mall in Washington, D.C.

The museum collected hundreds of items to illustrate life in Lyles Station, including the plow that founder Joshua Lyles used and a Mason jar full of soil from the farm.

Smithsonian curator Paul Gardullo says areas like Lyles Station were part of a broader wave of black settlements in what was then the country’s northwest.

“These communities were born in freedom,” Lyles says. “The old Northwest was chartered as a free territory and there was no slavery. So you can imagine the desire to move there on the part of not just white Americans, but certainly African-Americans as well.”

The people buying land were former slaves and others who had long been free. In the 1840s, Joshua and Sanford Lyles traveled from Tennessee to purchase land. It’s a story that Stanley Madison knows well. He’s the chairman of the Lyles Station Historic Preservation Corporation and is also a farmer.

In the restored Lyles Consolidated School, a house that’s now a heritage learning center, Madison uses a map from the 1800s to describe the black farming community’s geography.

“The largest piece of ground here would have been owned by Joshua Lyles; 1,040 acres,” Madison says. “That was unheard of for an African-American to own that type of land.”

Joshua Lyles donated some of that land to establish a rail station, which helped him and the other settlers sell and export the crops they grew. From the late 1880s to the early years of the 20th century, Lyles Station flourished.

“You would have saw 800 residents around here,” Madison says. There was a post office, two churches, two general stores, a lumber mill and a school.

The decline of Lyles Station began in 1913 when a devastating flood left most of the town under water. Later, the railroad would end its passenger service, and racist laws and practices would make life tough for everybody. Norman Greer says he couldn’t get a loan anywhere in the region. Instead, he had to go out of state.

Today, there are very few homes in Lyles Station and about 10 black families, mostly descendants from the original settlers. In addition to the scattered houses, the Wayman African Methodist Episcopal Church, a grain elevator and the school house — all saved from ruin — still stand.

There’s a sense of pride in the hearts of the people trying to keep the history of the town alive, but Denise Greer Jamerson, Norman’s daughter, says she fears that the farming ways of her father and Lyles Station are just about over.

“It’s going to be a thing of the past; the way that he farmed,” she says. “Down here he was huge. As a kid it would excite me at night to see them coming home from the field with two or three trucks with lights on. … But people don’t know that exists, and I think it’s an important piece of how we survived.”