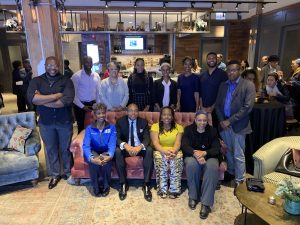 Ron Nixon, International Investigations Editor for the Associated Press, took a trip to Chicago to share his insight on investigative reporting and give tips to current and aspiring journalists. Making his presentation to a crowd-filled room at restaurant Taste 222 in the West

Some of the key skills Nixon shared about breaking into the competitive field of investigative reporting were cultivating sources, being comfortable with data, and thinking critically. He also mentioned documents he believed every investigative reporter should become familiar with; audits, budgets, contracts and lawsuits, among others.

More than 50 guests enjoyed light bites and classic cocktails provided by the owners of Taste 222. NABJ Chicago members and non-members actively engaged with Nixon, who also shared his personal experiences, which started as a reporter for a black-owned newspaper in

According to Nixon, sources start at the bottom. Citing the Watergate Scandal, Nixon shared that sources can be security guards, secretaries and janitors.

The event was curated by the National Association of Black Journalists, Chicago Chapter and Taste 222.