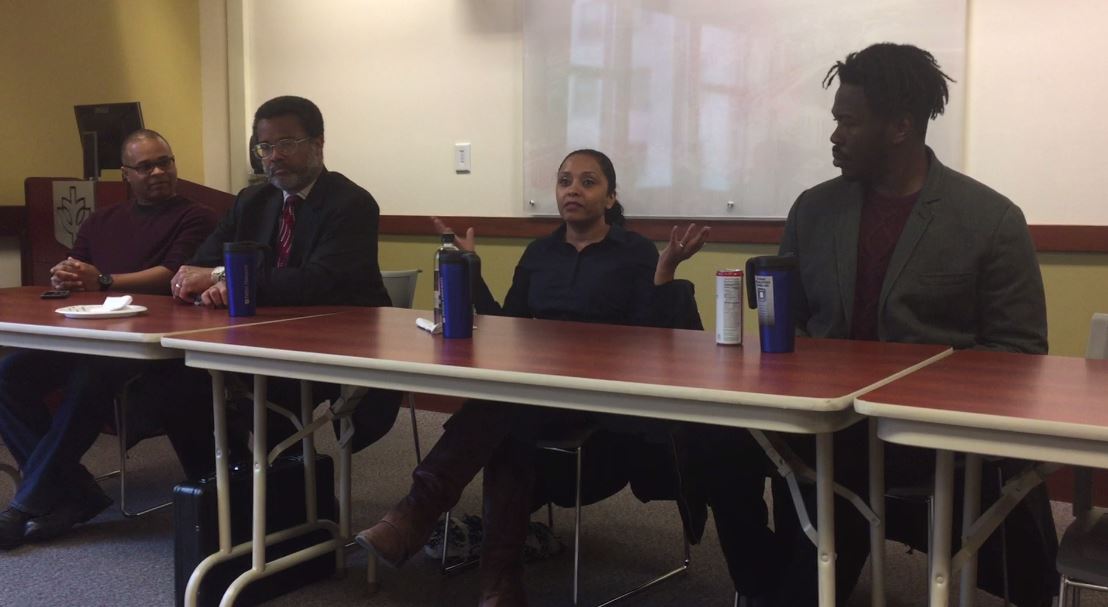 Most would agree on the need. There’s a need for more stories about black, Latino and other minorities in Chicago, but many times what those stories are and how they’re written or broadcast gets lost in translation.

Covering diversity in a city like Chicago is a nuanced and challenging proposition, and the panelists on SPJ DePaul’s and NABJ Chicago’s “Covering Communities of Color” (along with NABJ DePaul and 14 East magazine) in April explored how it goes awry and what needs to change.

Here of some of the highlights.

“I think black people in Chicago have everyday lives, do everyday things that don’t involve violence, but based on media coverage it’s hard to tell.”

I think that there’s even in our allies there is an understand of the need to cover communities of color and highlight our stories, but I don’t think there’s understanding that’s it’s different when you have someone from that community, someone who understands that community … and then having somebody else who’s an outsider who is not part of that community, or who does not know that community, covering that same issue. So I think that’s where the confusion is.”

“In sports right now one of the big issues that’s going on has to do with player expression, whether that’s a player expressing themselves with a political statement or a bat flip. A player hits a home run and flips his bat. We just a had a manager of the Pittsburgh Pirates single out two Latino players, Javier Baez and Willson Contreras from the Cubs, mainly because they play the game with too much joy. This idea that the way that they play the game is not the ‘right way’ to play the game.“

“… If you go look at baseball in the Dominican Republic, in Puerto Rico, in Cuba, in Korea, there’s a difference in the way that players express themselves on the field. And in America, in Major League Baseball, even in minor league baseball, if you express yourself too much, you get hit in the head with a baseball. There’s an implied threat that you can’t be too much of yourself if you’re going to fit in.”

“That doesn’t justify those whites that are disrespectful in their coverage of the African American community, yet that is extra fuel on that fire that fuels this battle we have to have in order to have balanced coverage.”

“If I want (moderator) Ally (Pruitt, who is white) to go cover a neighborhoood she’s not familiar with, I can’t be mad with her if she initially has some missteps as she’s learning the community that she’s going to cover. I think every reporter goes through that no matter what their background is.

“I think that finding the balance between how do we enlighten people who have never covered communities of color without the trial and error of them cover communities of color, I didn’t know how to do that. I’m not sure how we do that. But it should come from place of whoever that reporter is open to the idea of their own ignorance.”

“Chicago, it’s one-third white, one-third black, one-third Hispanic. We talk about finding reporters who can cover these communities and who have the compassion and understanding and the willingness to cover them in a proper light.

“I think we’re looking at an issue of diversity — there’s a lack of it in journalism. There’s also, where there’s representation, there’s not always power. So not having a black editor, a Latinx editor, an Arab-American editor in the whole damn newsroom sometimes, i think that itself is where you lose checks balance that you should have.”

“Why do you walk through a newsroom — even like Tribune, Sun-Times, wherever, or WBEZ — you’ll not see people who reflect the diversity of a very diverse city? So I think No. 1 that’s like, boom, the big No. 1 problem.”

“When I think about the process with an editor, it seems too much like a power struggle. A negotiation of say, well, I mentioned this guy played basketball growing up, but you just kind of framed him as this ‘basketball-loving kid from Bronzeville.’ They may not get that there’s certain connotations that they put on — talking about white people — because maybe there’s some cultural tone-deafness, there’s lack of exposure in communities. It’s something that I’m constantly fighting for how things are framed. We don’t have to label every area ‘infamous.'”

“More of me has made a big difference in the last two years of coverage in our section. You’ve seen diversity in so many ways, not just race and gender. You’ve seen it with disability, LGBT community, all over the place. I don’t have to think about diversity because I am diversity.”

“The Sun-Times only has one editor of color, and she’s a South Asian woman. And I guess luckily for me that’s the woman I report to the most. I can come to her and be like, listen, you’re misshaping my story and it’s doing a disservice to what I’m trying to do here or the broader thing I’m trying to go for. And more often than not I can convince her. But when I’m talking to my white male editors, it’s more of a negotiation; it’s more of a pushback. It’s more of, ‘Well, why do we even need a story on rent control?’ Or ‘Why are you trying to do a story about the community benefits agreement for the Obama Center?’ And I’m saying these people live in this community and they’re asking for this, and I think that that’s news. … We need to focus on what the people are saying.

“It’s constantly a negotiation or a debate, and me trying to say in the politest way possible, ‘F’ your standards, I think we should include these people in our paper more than we are right now. We have to be more inclusive.”

“If you take out the urban stations, that leaves me as the only black full-time talk show host in Chicago. Think about that. This is 2018 and I’m the only one. And so when all of this stuff was going on, I reached out to people I respect to say what was my next move. What do I do, how do I express myself and some of my frustration and my anger with what’s going on here, and I had a manager of another station say you can’t leave, because if you leave there will be none.”

–Laurence Holmes on The Score’s firing of Jason Goff.

“South Side is sort of this monolithic thing. They don’t even bother to name the neighborhood. Like that particular place and its history isn’t a whole other beast that needs to be understood to write knowledgeably about. The idea that the South Side is this big violent sort of just wasteland, that’s the biggest misconception, I’d say.”