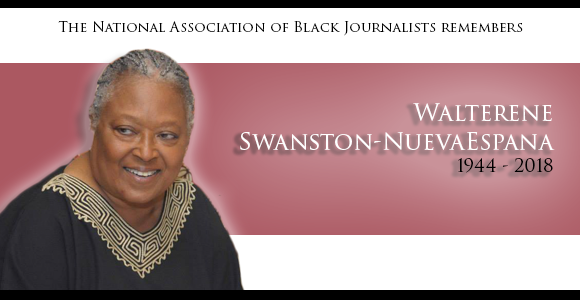 0 Comments
In NABJ National News
Washington, D.C. (Jan. 22, 2018) — The National Association of Black Journalists (NABJ) celebrates the life of veteran journalist and media executive, Walterene “Walt” Swanston-NuevaEspana. She passed away last Friday in Fairfax, Virginia.
For more than 25 years, Swanston-NuevaEspana developed diversity strategies for newspapers, television and radio stations, and she was instrumental in helping them to recruit, promote, train and retain people of color and women.
Swanston-NuevaEspana, 74, was a distinguished contributor and leader in journalism and media having previously served as the executive director of NABJ; executive director of Unity: Journalists of Color; and director of diversity management for National Public Radio (NPR).
NABJ Founder Paul Delaney says the loss of Swanston-NuevaEspana will be felt throughout the news media. “Walt’s death is a tragic loss for journalism,” said Delaney. “She gave her all to diversity and it’s a personal loss for me. She will be missed.”
Temple University’s assistant dean of the Lew Klein College of Media and Communication, Arlene Notoro Morgan, cites Swanston-NuevaEspana as a source of encouragement. “I feel an incredible gratitude for having Walt Swanston in my life as a mentor, coach, inspiration and, most of all, trusted friend,” she said.
Walterene Swanston-NuevaEspana’s contributions to journalism and media are indelible. NABJ thanks her for her leadership and unwavering commitment to media diversity and the greater journalism community.
About The National Association of Black Journalists
An advocacy group established in 1975 in Washington, D.C., NABJ is the largest organization for journalists of color in the nation, and provides career development as well as educational and other support to its members worldwide. For additional information, please visit www.nabj.org.