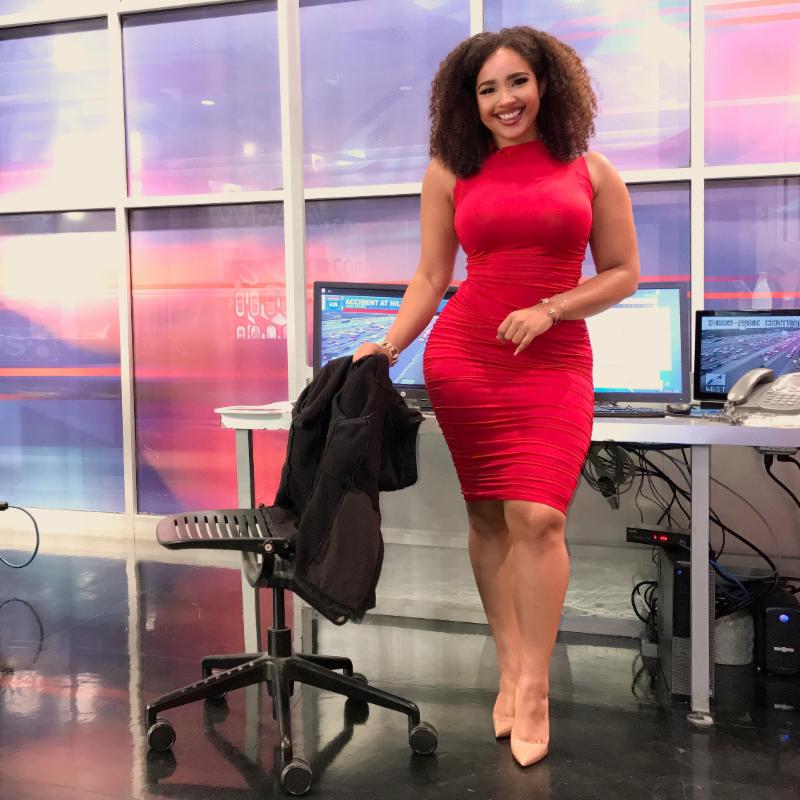 WASHINGTON, D.C. (Nov. 6, 2017) — The National Association of Black Journalists (NABJ) is appalled at the insensitive and hateful social media posts recently leveled toward traffic reporter Demetria Obilor of WFAA-TV in Dallas. While many have shared messages of support, Obilor has been the target of negative social media posts that criticize her hair, looks and attire. One viewer, expressing her displeasure, even called for a boycott of the station.

“The negative comments lodged at Demetria Obilor are very disturbing. The rhetoric is classic cyberbullying and the undertones are hurtful and demeaning,” said NABJ President Sarah Glover. “We hope that employers abhor this kind of harassment and online hate when they see it, support their employees, and cultivate diversity and inclusiveness.”
Obilor, a graduate of the University of Kansas with a degree in broadcast journalism, just started a new job in Texas. One viewer, named Jan Shedd, ridiculed Obilor on social media and many came to Obilor’s defense in subsequent posts. Shedd’s posts are no longer public.

NABJ is disturbed by the cyber harassment that is occurring and hopes that media executives will not be swayed by these various forms of abuse.
Calling attention to the work of Michelle Ferrier Ph.D. and TrollBusters, Glover said women are frequently the target of people who seek to embarrass and sometimes cause emotional or bodily harm. Through TrollBusters, online harassers are being dealt with and organizations like NABJ join Ferrier in speaking out in support of journalists.
Just last week, Ferrier spoke of online harassment faced by women journalists at the United Nations.
“According to the International Women’s Media Foundation and the International News Safety Institute, 88 percent of journalists worldwide feel their work is more dangerous now because of the use of social media to connect with audiences, and distribute news and information around the globe,” said Ferrier. “These same social media channels are used to stalk, discredit and threaten women journalists…. In some cases, this online harassment crosses professional boundaries and affects the personal lives of these women.”
Glover says there are ways to deal with cyberbullies, and supporting the victim is the first step.
“This is an issue for all women and we encourage others to speak up and say ‘no more cyberbullying,'” Glover said. “Demetria has our support and we stand with her and all women who are being victimized and body shamed.”
Following the 2017 NABJ Convention in New Orleans, a group of NABJ female members started a Facebook Group, the NABJ Black Women’s Media Project, to support one another after a convention-related discussion of sexual harassment. The group, led by member Sherri Williams Ph.D., will be proposing programming around these issues.
NABJ Founder Joe Davidson spoke out against abuse women face at the 2017 fall NABJ board of directors meeting. He expressed that men need to speak up and out as well. President Glover has pledged NABJ will create a specific policy on harassment and she offers NABJ’s support to journalists and media professionals who experience harassment, abuse and cyberbullying.
Already in the Dallas area, the support for Demetria has been overwhelming, according to Cheryl Smith, current president of the Dallas-Fort Worth Association of Black Journalists.
“I have received calls about Demetria and folks are very upset. She is a talented journalist and we celebrate her hiring. She is a welcomed addition to this market and we applaud WFAA for standing behind her because the cyber attacks are reprehensible.”
###
About The National Association of Black Journalists:
An advocacy group established in 1975 in Washington, D.C., NABJ is the largest organization for journalists of color in the nation, and provides career development as well as educational and other support to its members worldwide. For additional information, please visit, www.nabj.org.