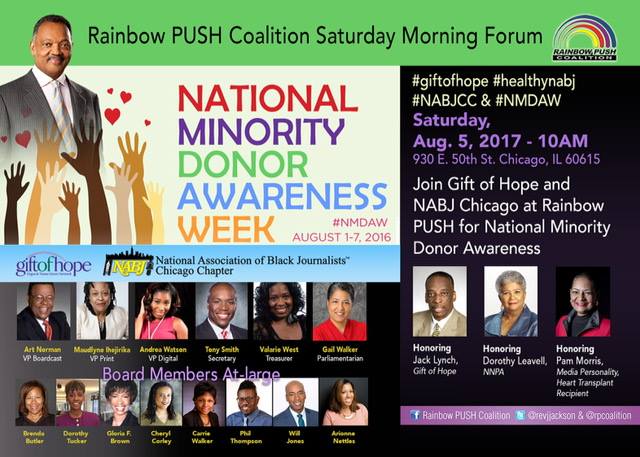 CHICAGO (August 8, 2017) – During Saturday morning broadcast at Operation PUSH, the National Association of Black Journalists (NABJ) Chicago Chapter partnered with Gift of Hope to give voice to the need for increasing the number of minority organ and tissue donors in Illinois.

Dorothy Tucker, NABJ National Vice President of Broadcast attended and stated, “I am so proud of the NABJ-Chicago chapter, which showed much love and support for our Healthy NABJ partner, the Gift of Hope Organ & Tissue Donor Network.” It is important for the NABJ to share in the Gift of Hope mission to mobilize to create increase awareness of the need for more organ, eye and tissue donors, especially among minorities. 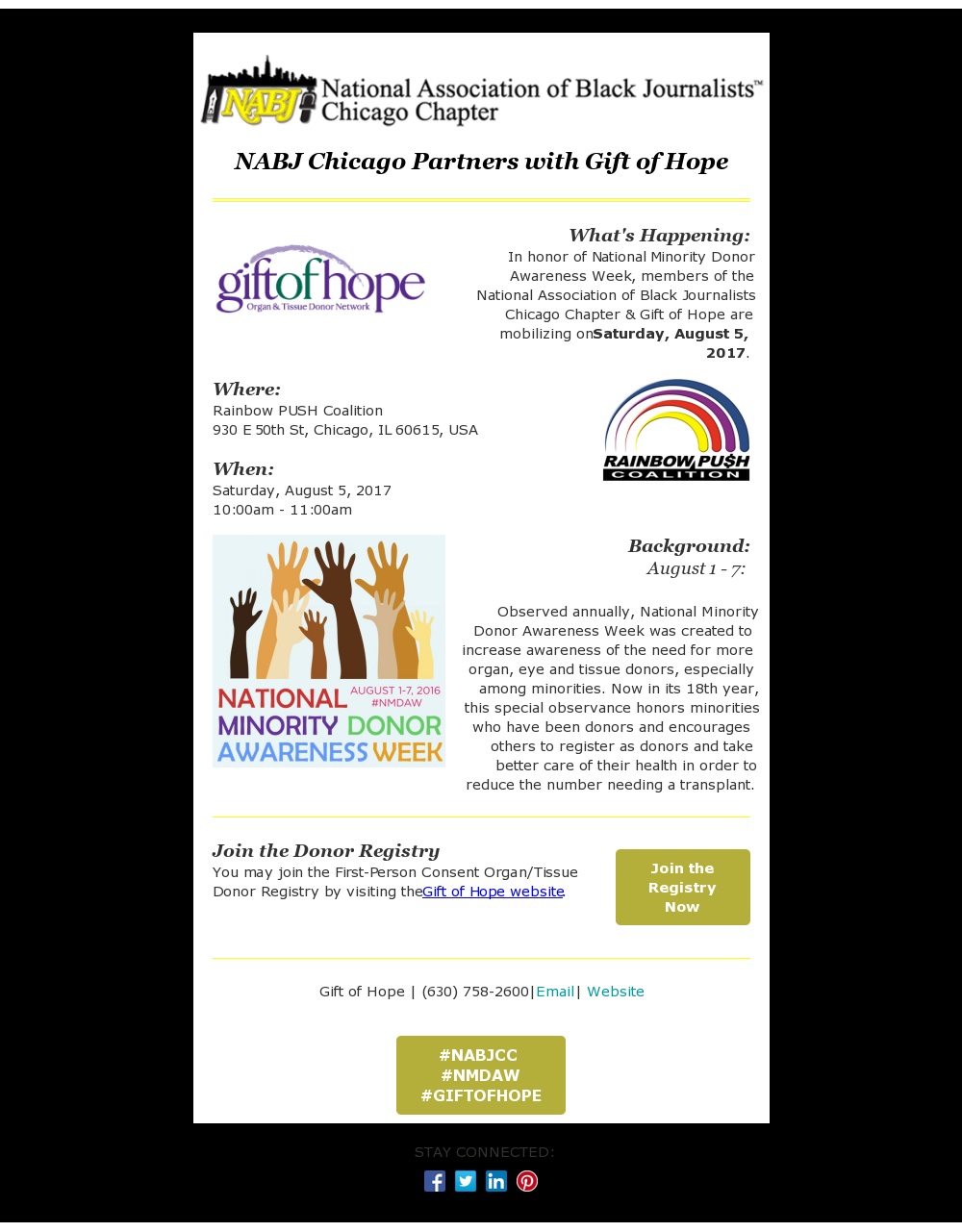 Minorities comprise 63 percent of those on the waiting list for organ donor transplantation; however, only 33 percent of blacks donate organs. The wait can be a few months or as long as several years. But that doesn’t lessen the hope and determination of Norrine Nix, who has Lupus and needs a double lung transplant. On Saturday, Nix joined others at Operation PUSH to call attention to the need for organ donors and encouraged everyone to register. People of color are disproportionately impacted by the lack of compatible donors for organ transplants. This dearth of organ donors can be contributed, in part, to fear, religion, lack of information, cultural insensitivity and even racial discrimination.

During PUSH’s broadcast, Jack Lynch was presented the Corporate Community Service Award. For the past 28 years, Lynch has been Director of Community Affairs for Gift of Hope Organ & Tissue Donor Network. He was honored for his years of crusading in the organ donor community; tirelessly serving the industry, saving countless number of lives over the years. He is a founding member of the Association of Multicultural Affairs in Transplantation (AMAT) and developed a national model program on how to approach minority families for consent and permission. He teaches and lectures all over the country. Additionally, Lynch spearheaded the largest and most successful donor registration in the country, in Chicago, with more than 4,000 people on one day; and, he is past chair for the Governor’s Task Force on Organ and Tissue Donation Committee.

The Outstanding Journalism and Publishing Award was given to Crusader publisher Dorothy Leavell. She has successfully run the Crusader newspaper since the 1960s from the same south side office.
She was recently elected chairman of the 200-member National Newspaper Publishers Association (NNPA), a Black Press Trade Association.

Heart transplant recipient Pam Morris was presented the Hope for Life Award. It was just last year, when doctors informed her she was seriously ill and, thanks to a suitable donor, she received a heart transplant. This month marks the one-year anniversary of her life-saving organ transplantation. Morris is the former WVON-AM gospel show host. She is a retiree and founder of the non-profit organization P. Morris & Associates.

For more information about organ donor and tissue donation and how to sign up to register to become a donor go to the Gift of Hope website at www.giftofhope.org.

This story was published by the Chicago Citizen Newspaper Chicago.

The Citizen was founded in 1965 by the late Illinois Congressman Augustus Alexander ” Gus” Savage, during the height of the Civil Rights era and yet on the helm of the passing of the Voter Rights Act. Through three newspapers including the Chatham Citizen, Southend Citizen and Weekend Citizen, the Citizen Newspaper chain quickly became the voice for the Black community, telling the stories of many from the Westside to the South side and throughout neighborhoods in Chicago. The Citizen Newspaper Group is the largest Black-owned chain of audited weeklies in the Midwest with a circulation of 121,000 and a readership over 400,000. For 52 years, the Citizen has stood committed to informing, challenging and contributing to the growth of its community. We are a trusted and reliable news source earning us the right to be called the “Eyes and Ears” of the community. Located at 8741 South Greenwood Ave., Chicago, Illinois 60619 (773) 783-1251. Publisher and CEO: Darrell Garth