0 Comments
In News
Momentum is already building for another successful joint convention! 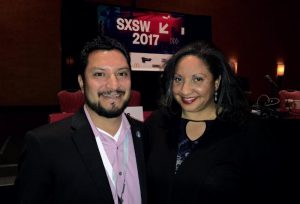 NAHJ President Brandon Benavides and NABJ President Sarah Glover attended SXSW 2017 in Austin, Texas. Glover’s participation on a SXSW panel was a first for an NABJ President and the first time NABJ leadership attended the convention. The mega convention attracts 70,000 attendees each year.

WASHINGTON, D.C. (August 8, 2017) — The National Association of Black Journalists (NABJ) and the National Association of Hispanic Journalists (NAHJ) are pleased to announce the two organizations will come together again and host a joint convention in 2020. NABJ President Sarah Glover and NAHJ President Brandon Benavides have signed a Memorandum of Understanding demonstrating their commitment and to officially begin planning.

The two presidents are excited that the associations are collaborating again as partners to produce another epic journalism convention in 2020.

The two organizations held the joint #NABJNAHJ16 convention in Washington, D.C. last year, known as #NABJNAHJ16. The gathering garnered nearly 4,000 attendees and attracted major newsmakers and celebrities, including Democratic presidential candidate and former Secretary of State Hillary Clinton. Convention partners responded with enthusiasm on the quality of the programming and registrants and the career fair booths were sold out.

“NABJ is looking forward to hosting another joint convention with NAHJ. Both groups executed a memorable convention experience for our members and the journalism industry last year. We have a lot of momentum to build off of as we head into 2020,” said Glover. “It only makes sense to bring black and Hispanic journalists together as we move toward what is shaping up to be a history-making election in 2020.”

“Over the next couple of years as we’re moving toward returning to a joint convention with NABJ, we’ll be recognizing the priorities in our programming, special events and all elements of a conference that our members value most.” said NAHJ President Brandon Benavides. “It is critical that as the two-largest journalism associations of color, we not only make an investment into our student journalists, but also provide the best resources to develop talent and make it our mission to create more leadership training opportunities for all of our journalists.”

Both organizations anticipate increased convention attendance in 2020. The city location will be released at a later date.

About The National Association of Black Journalists:
An advocacy group established in 1975 in Washington, D.C., NABJ is the largest organization for journalists of color in the nation, and provides career development as well as educational and other support to its members worldwide. For additional information, please visit,www.nabj.org.