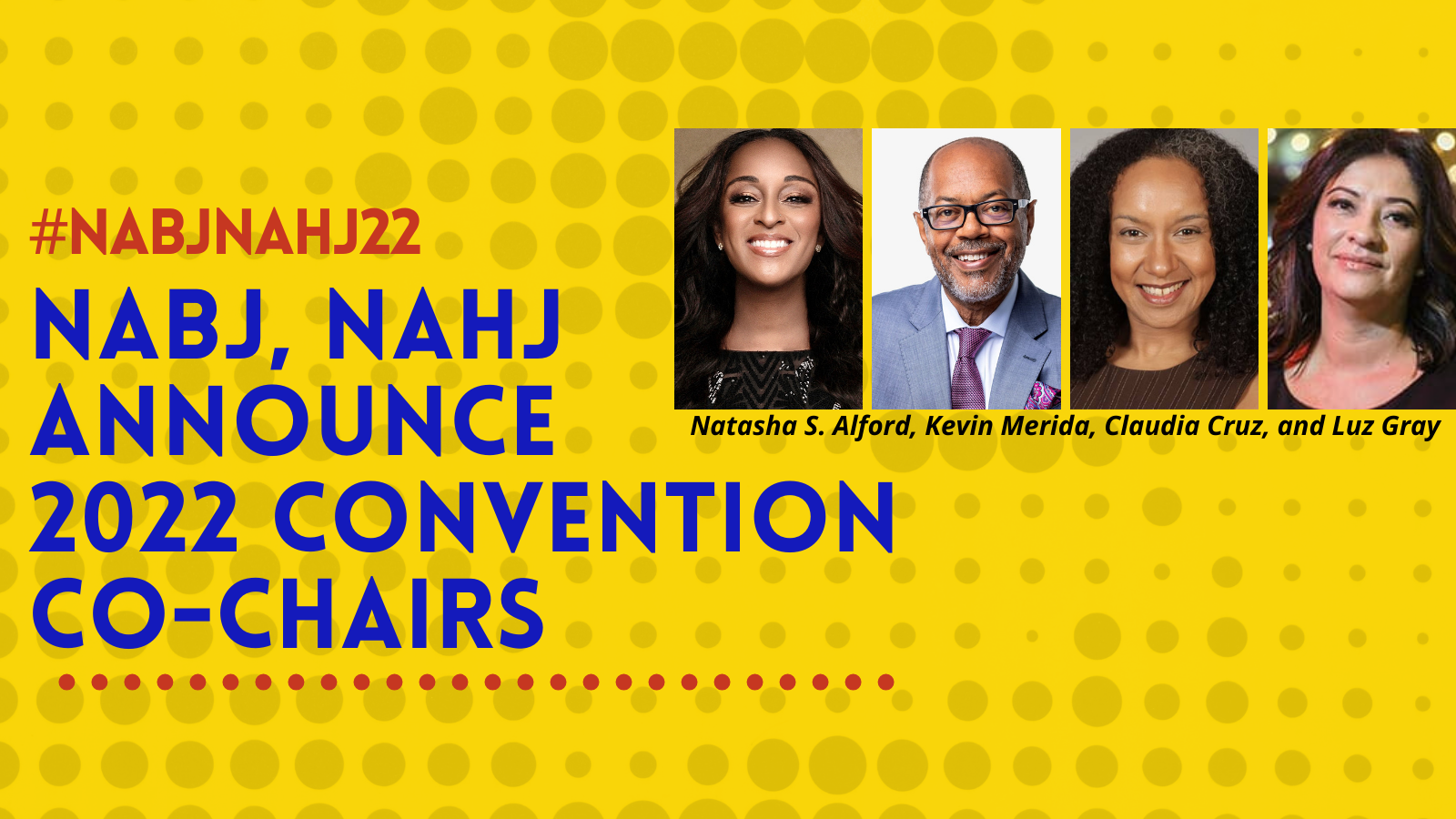 The National Association of Black Journalists (NABJ) and the National Association of Hispanic Journalists (NAHJ) today announced the team that will chair the groups’ joint Annual Convention and Career Fair scheduled for Aug. 3-7, 2022 in Las Vegas (pending local and CDC guidelines). This year’s co-chairs, Natasha S. Alford, Kevin Merida, Claudia Cruz, and Luz Gray, represent the spectrum of today’s media landscape, and each share a passion for advocating for diversity, equity and inclusion.

“We are excited about the expertise and experience Natasha and Kevin will bring to our upcoming convention as co-chairs,” said NABJ President Dorothy Tucker. “Their respective insights – from digital content and documentaries to newsroom management and investigative reporting with a West Coast-style – will help to ensure that this year’s activities provide attendees of all generations and backgrounds with the tools and resources they need to thrive.”

“We are delighted to welcome Luz and Claudia as NAHJ chairs for this year’s convention,” said NAHJ President Nora López. “With their industry-wide expertise – from award-winning reporting to journalism education, this duo is sure to be excellent representatives of our membership. They will be vital to ensuring our event meets the needs of our attendees and will provide a valuable connection between them and the Nevada Hispanic community.”

Learn more about the co-chairs below.

Alford is an award-winning journalist, digital host, and millennial media executive. As Vice President of Digital Content and a Senior Correspondent at theGrio, she helps lead a national team in reporting the most critical news and issues impacting the African American community. Natasha is also a CNN Political Analyst, where she offers commentary on the news, politics, and movements of the moment. Her work has appeared in The New York Times, The Guardian, Vogue, and Oprah Mag. Alford was previously named NABJ’s 2018 “Emerging Journalist of the Year” (2018). She is also a Pulitzer Center for Crisis Reporting grantee and executive producer of the documentary “Afro-Latinx Revolution: Puerto Rico” (2020).

Merida is the executive editor of the Los Angeles Times. He took the helm of the largest news-gathering organization in the West in June 2021 and oversees the newsroom as well as Times Community News and Los Angeles Times en Español. Previously, Merida was a senior vice president at ESPN and Editor in Chief of The Undefeated, a multimedia platform that explores the intersections of race, sports and culture. Under his leadership, the Undefeated gradually expanded across Walt Disney Co. with a content portfolio that ranged from award-winning journalism to documentaries and television specials, from albums and music videos to digital talk shows. During his tenure at ESPN, he also oversaw the investigative/news enterprise unit.

Gray has been with The Nevada Independent since its launch in 2017. She oversees The Nevada Independent en Español division. She edits Spanish-language stories, oversees the assembly of its Spanish newsletter, and produces and hosts the Cafecito Nevada podcast and radio show on Fiesta 98.1 FM in Las Vegas. Luz was the host and producer for Contacto con Luz, a weekly community affairs show on Univision Radio Las Vegas, from 2005-2016. Her show featured community leaders, politicians, and nonprofit executives, providing a valuable connection between them and the Las Vegas Hispanic community. In 2014, Luz served as president of NAHJ-NV. In 2010, Luz was awarded an Electronic Media Award by the Nevada Broadcasters Association.

Cruz is the managing editor of the Reynolds School of Journalism’s Noticiero Móvil, a faculty-run, student-produced bilingual news service. Under her short tenure, the media outlet and its local journalism partners won a national 2021 Murrow Award for Diversity, Equity and Inclusion in a small market for their collaborative 2020 bilingual pandemic coverage. In addition to this role at the University of Nevada, Reno, she is the director of internships and experiential learning at the Reynolds School. Prior to that, Cruz worked as a technology reporter for CNET en Español where she covered the industry and corporations like Apple, Alphabet and Meta in Silicon Valley. Her work earned her a Silver 2019 Telly Award in science and technology.