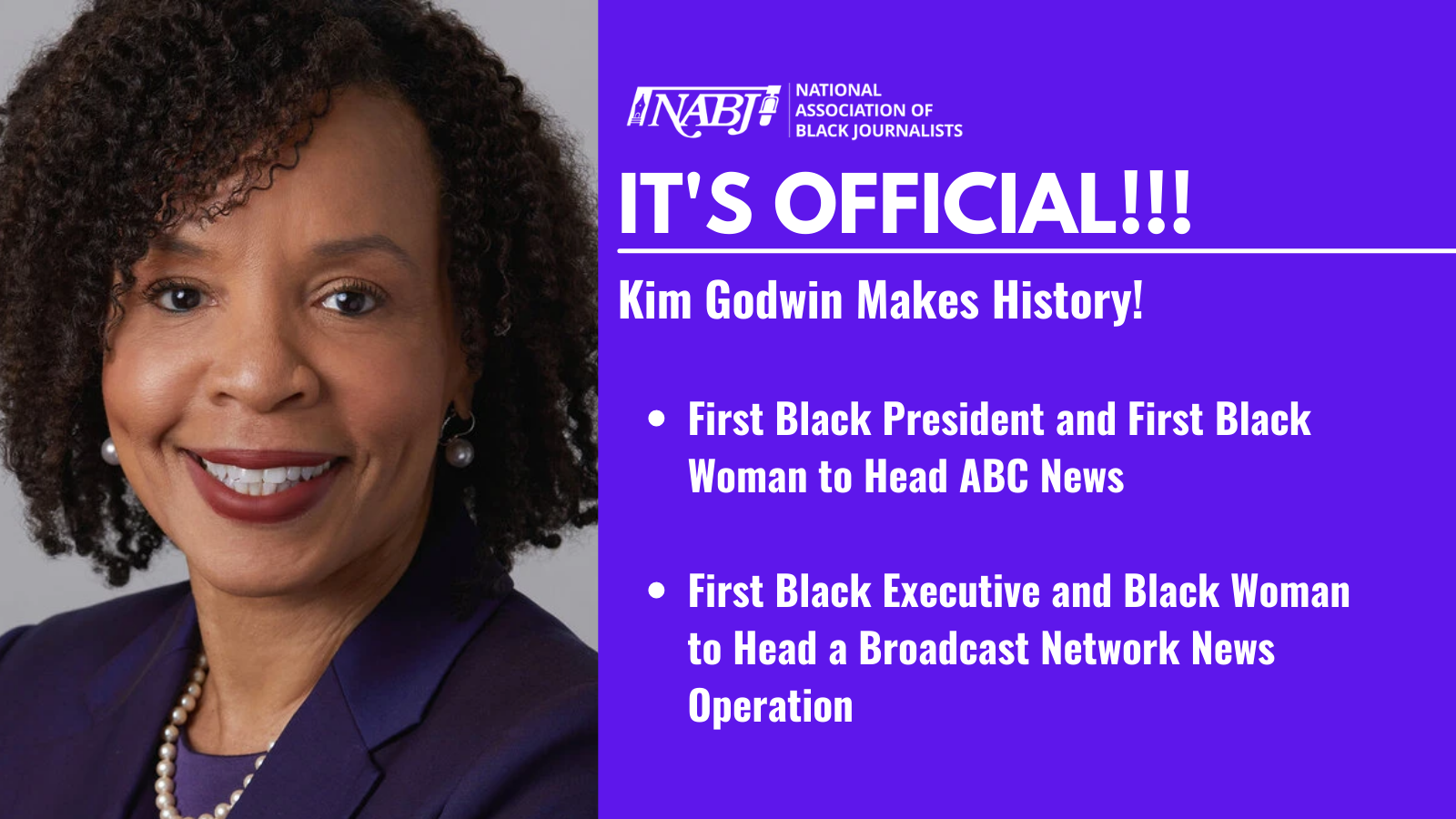 “This historic announcement shows what we at NABJ have always known: there are Black executives more than capable of taking the reins of a network operation. We hope this move sends a clear signal to other networks,” said Ken Lemon, NABJ Vice President-Broadcast. “The NABJ Family is thrilled that Kim has been tapped for this position and it is the logical next step for a hard-working news leader. Her appointment opens the door for diversity and inclusion at a higher level. The glass ceiling is broken and must be shattered.”

Godwin told NABJ that her new role is a testament to the work of those who came before her to open doors for Black journalists.

“The significance of this appointment is not lost on me,” Godwin said. “I stand on the shoulders of giants in journalism who paved the way as members of NABJ. I was mentored by many in this organization and have therefore made it my business to mentor many as I’ve come along. I’m looking forward to joining the extraordinary team at ABC News and excited about what we can accomplish together.“

ABC’s official announcement on Godwin’s appointment is below.

Kimberly Godwin was named president of ABC News today by Peter Rice, chairman of Disney General Entertainment Content, to whom she will report. Godwin will oversee editorial and business operations for broadcast, digital, streaming and audio news across the organization which includes trusted and iconic franchises “Good Morning America,” “World News Tonight,” “20/20,” “Nightline,” FiveThirtyEight, “The View” and “This Week.”

Godwin will join ABC News in early May and brings to the team a breadth of experience in newsroom leadership garnered from an accomplished 35-year career dedicated to excellence and the vital role of journalism. As an experienced and strategic executive, Godwin has overseen newsgathering and managed full editorial oversight across a global portfolio of news properties. At the network level, she has executive produced news programming, managed a nightly news broadcast, created cross-digital content, and earned recognition for award-winning programming and reporting. Godwin began her career running local newsrooms in markets across the U.S. including New York, Los Angeles, Dallas, Philadelphia and Cleveland.

“Kim is an instinctive and admired executive whose unique experiences, strengths and strategic vision made her the ideal choice to lead the outstanding team at ABC News and build on their incredible success,” said Rice. “Throughout Kim’s career in global news organizations and local newsrooms, she has distinguished herself as a fierce advocate for excellence, collaboration, inclusion and the vital role of accurate and transparent news reporting.”

“I have immense respect and admiration for ABC News,” added Godwin. “As the most trusted brand in news, they are to be commended for the extraordinary work and dedication of the journalists, producers, executives and their teams across the organization. I am honored to take on this stewardship and excited for what we will achieve together.”

Godwin joins ABC News at a time of incredible strength across the organization. “Good Morning America” is No. 1 for the ninth straight year, and “World News Tonight with David Muir” is No. 1 across the board, ranked as the No. 1 evening newscast for the last 54 weeks in Total Viewers, Adults 25-54 and Adults 18-49. “20/20” is Friday’s No. 1 newsmagazine, beating “Dateline” in all key demos this season. Honored with the Daytime Emmy® Award for Outstanding Informative Talk Show and delivering its most-watched season in seven years, “The View” ranks at the top of all network and syndicated daytime talk shows; plus, “Nightline” and “This Week” are posting their most competitive seasons in years. In the last year, ABC News has covered the biggest stories with distinction, from COVID-19 and racial reckoning to the election, its aftermath and the crisis at the border. Additionally, ABC News reached over 132 million people a month and delivered over 11 billion video views on digital and social platforms. Since January 2020, an average of 20 million viewers have tuned in monthly to ABC News Live, the network’s streaming news channel, an increase of +142% year over year. ABC News has won the Edward R. Murrow Awards for Overall Excellence in Television five out of the last seven years, and three for Overall Excellence in Radio in that time, plus numerous prestigious honors in journalism, including duPont, SPJ, NABJ and Emmy Awards.

Godwin joins Disney from CBS where she was second-in-command as executive vice president of News directing newsgathering across the global portfolio with full editorial oversight. A multitalented trailblazer with exceptional journalistic instinct and skills, she also had served as vice president of News, CBS News executive director for Development and Diversity, and senior broadcast producer of the “CBS Evening News.” At CBS, she oversaw Network News Services and 400 domestic and foreign affiliates; CBS Audio Services including over 600 affiliates and podcasts; the National Desk and domestic bureaus; News Standards & Ethics; and Race & Culture. She joined the network in 2007.

A fierce champion for inclusion and telling representative stories, in 2020 Godwin helped to develop and oversaw both the CBS News Race & Culture Unit and CBS Village, a multiplatform franchise to highlight content about diverse groups. She was recognized in November 2020 by the National Association of Black Journalists and the Medill School of Journalism at Northwestern University with the Ida B. Wells Award for her work in advocating for coverage of communities of color, building a diverse newsroom, and championing young journalists throughout their careers.

Godwin is a proud graduate of Florida A&M University, where she earned her Bachelor of Science degree in broadcast journalism. FAMU was the first historically Black university to have an accredited journalism program. She is currently the chair of the board of visitors at her alma mater’s journalism school.

Over her career, Godwin has been honored with six National News and Documentary Emmy Awards, two Edward R. Murrow Awards, an Alfred I. DuPont-Columbia award, and a Sigma Delta Chi Award. She is also a well-regarded member of the National Association of Black Journalists.

Godwin is married to an accomplished high school principal and has a wonderful blended family of two daughters and two stepchildren.