Did You Get the Memo? Author Minda Harts Has One for Black Women Fighting to Thrive in the Workplace - National Association of Black Journalists-Chicago Chapter
10961
post-template-default,single,single-post,postid-10961,single-format-standard,mkd-core-1.0.4,tribe-no-js,ajax_fade,page_not_loaded,,mkd-theme-ver-1.11,vertical_menu_enabled, vertical_menu_width_290,smooth_scroll,wpb-js-composer js-comp-ver-5.5.2,vc_responsive 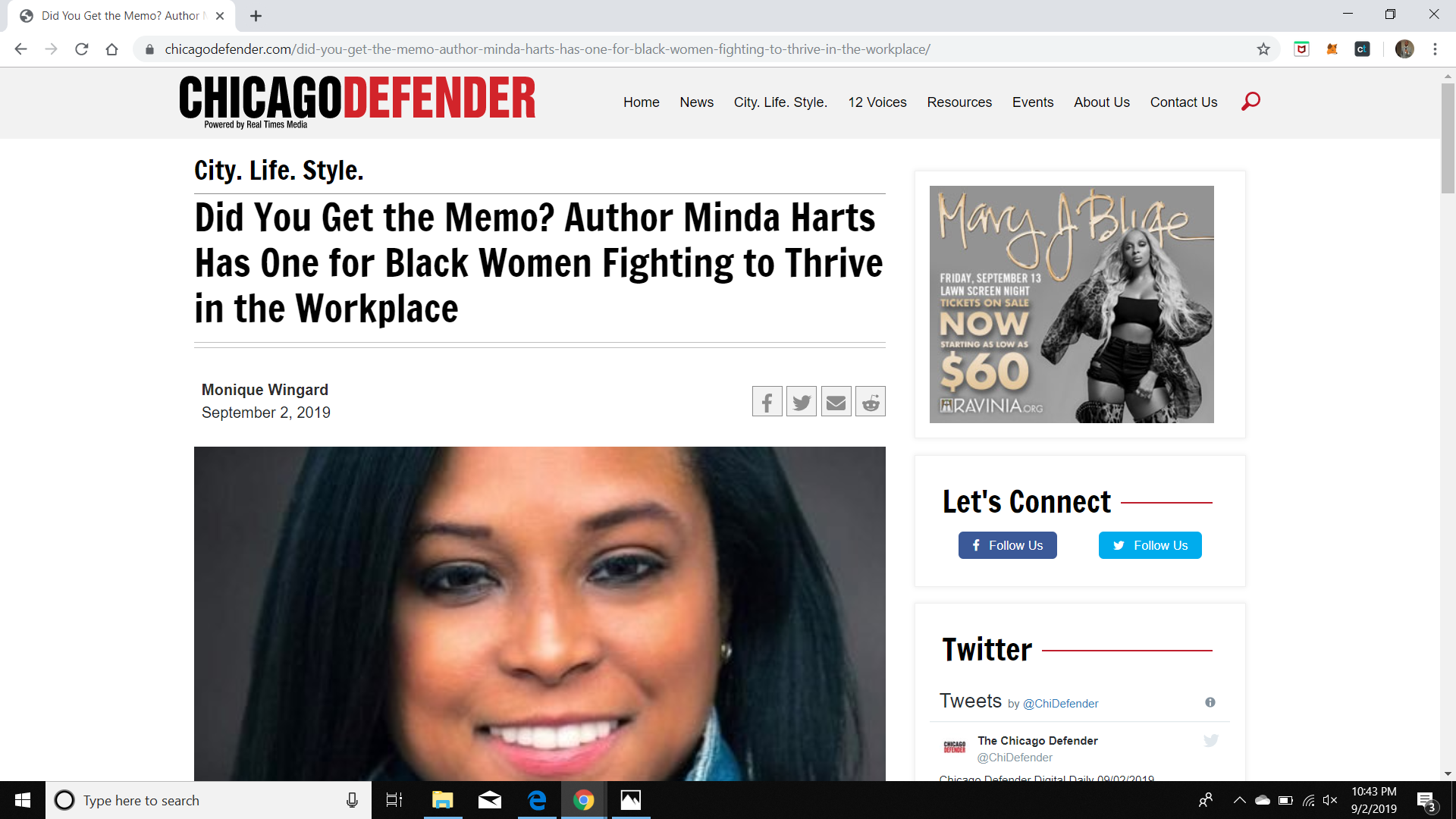 It’s a familiar phrase heard round the working professional world, “Did you get the memo?” or the dreaded, “You must have missed the memo.” No matter your familiarity with the word, speaker, professor, and now, author, Minda Harts has a memo for women of color that speaks to shared experiences, existing biases, and “ugly truths” that she says we can no longer ignore.

On Wednesday, August 29, Harts was the guest of honor for a much anticipated, honest discussion in downtown Chicago about the release of her book, “The Memo—What Women of Color Need to Know to Secure a Seat at the Table.” The discussion was led by Scrum Master, and host of Black Tech Unplugged, Deena McKay,

“She has a voice for women of color across many industries,” says McKay. “I was inspired by her message when everyone thought we could just “Lean In’ and other such tactics, but we can’t!”

McKay says “The Memo” gives women of color an opportunity to finally have their stories heard, with tips and advice to successfully navigate the workplace. “The book was well overdue and I wanted women who looked like me to know this book was available.”

Harts, an alumna of Western Illinois University, also serves as the founder of The Memo LLC, a career development company founded in 2015 for women of color. The mission of the company focuses on motivating women to take control of their careers and achieve personal and professional goals with balance, generosity, integrity, and resilience.

“We can no longer be ambivalent about what we want out of our careers,” says Harts. “I want them to learn how to quantify their worth and ask for what they want.” Her company also aims to provide access to spaces, community, and curriculum to guide women in the development of their careers.

“We don’t work in a system of meritocracy and it’s time we give ourselves permission to dream even bigger.” According to her website, mindaharts.com, she is on a mission to shine a light on the “ugly truths” faced by women of color in the workplace, including micro-aggressions, systemic racism, and white privilege. The book is described as validation that “women aren’t making up the discrimination they feel, even if it isn’t always overt.”

On August 22, the internet was swirling with facts and figures in observance of Black Women’s Equal Pay Day, an annual event to raise awareness about pay inequality, specifically for Black women. The Institute for Women’s Policy Research reports that on average, black women in the U.S. are paid 39 percent less than white men and 21 percent less than white women.

“People need to understand diversity and what that truly means,” says McKay. “Our experience as black women in the workplace is completely different than our counterparts.”

McKay’s advice for anyone who still questions the need for conversations about race and workplace diversity: “If people really want to be inclusive it’s time to hear our stories and understand our perspectives so we can all happily exist.”

“Negotiation is a high-stakes game, and you can’t show up unprepared,” says Harts. “At the very least, you should know what the market rate is for the job.” Harts says having adequate information will “set you up for success and allow you to prepare a counter-argument if you are offered a salary lower than the market rate.”

The Harvard Business Review recently reported that while women ask for raises as often as men, women are still less likely to get them. A common theme and only explanation garnered from their research was that women are less likely to negotiate their salaries. Additionally, it was discovered that women, in general, were found to “act less assertively in negotiations for fear of upsetting the relationship with their boss or colleagues.”

“The internal work of knowing that we are worth it to make such an ask plays an important role,” says Hart. “Worth is so important. Once we tap into our currency, I believe we will be unstoppable at work.”

For women of color in search of a way to join Harts on her mission of advocacy and meaningful change, she suggests the following: “Black women are at the forefront of many political and social movements right now in this country,” says Harts. “It will take us leaning into our courage and forging ahead toward the tables we want to sit at and create.”

Harts also expressed her belief in women stepping up to be leaders in the business sector and tapping into the power of collaboration over competition. “I want to make sure we are as equipped as possible when we secure our seat. We have to be deliberate about our next steps and remember that success is not a solo sport– it will take each of us supporting each other as we climb. Not everyone has access to the information they need to succeed nor do they have a network to encourage them to dream bigger.”

The buzz on social media about Harts and her call to action, alone, makes it apparent that her experience resonates with countless women.

“Often, hearing other black women share their stories gives us permission to value our own,” says La’Keisha Gray-Sewell on Instagram.

Many other women present for the Wednesday night event have also taken to Twitter and Instagram to express their joy, using the hashtag #getthememo.

As for a desired outcome beyond the tweets, posts, and photos, McKay says, “I want everyone to read the book! Then I want them to hold conversations with their friends and allies to discuss the points interesting to them,” says McKay. “I want everyone to implement one or two tips Minda mentioned in her book into their workplace life and tell others their results or what they had to change.”

In addition to maintaining her role as an assistant professor of public service at New York University’s Robert F. Wagner Graduate School of Public Service, Harts plans to continue her fall book tour with stops in Atlanta, Dallas, Seattle, and more. “I felt it was necessary to remind black women how amazing they are and that if I can heal from the workplace broken hearts, they can too. We are the future and we have to prepare ourselves for when those opportunities come–our time is now.”