NABJ Chicago congratulates the winners of our 2015-2017 scholarships. As always, NABJ Chicago received a terrific pool of applicants from universities throughout Chicago and the Midwest. NABJ Chicago would like to thank all of the journalism school advisors and professors who helped forward these impressive candidates. 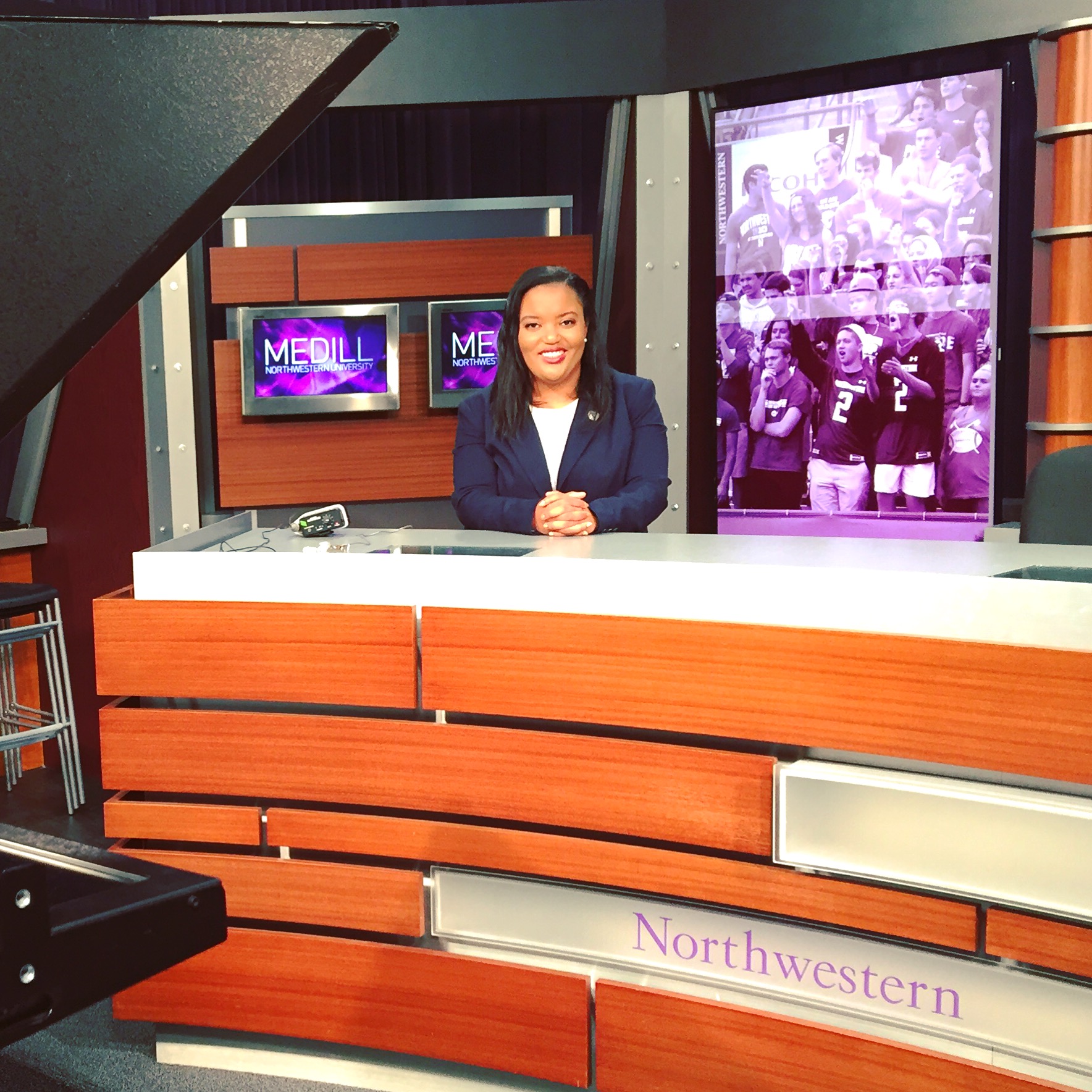 “Thank you so much for selecting me to receive a scholarship towards my graduate school program. While in the program, I had the opportunity to report from the White House and Capitol Hill and work for USA Today at the DNC.

“I was a 2016 White House Correspondents’ Association Scholarship winner. As an aspiring White House correspondent, receiving the WHCA scholarship and having a chance to meet President Obama and First Lady Michelle Obama was a dream come true.

“Since January 2017, I have been serving as a freelance writer/production assistant for theGrio.com. Here’s some of my work: Yoga Boss Jessamyn Stanley: “You can’t look for your love in the feedback of strangers.

“Although I studied broadcast journalism (specifically television), I recently decided to pursue a career in radio and this summer, I am going to Atlanta — where I lived during my time in undergrad at Spelman College — to seek job opportunities available in radio. I look forward to networking, as I work towards relocating.” 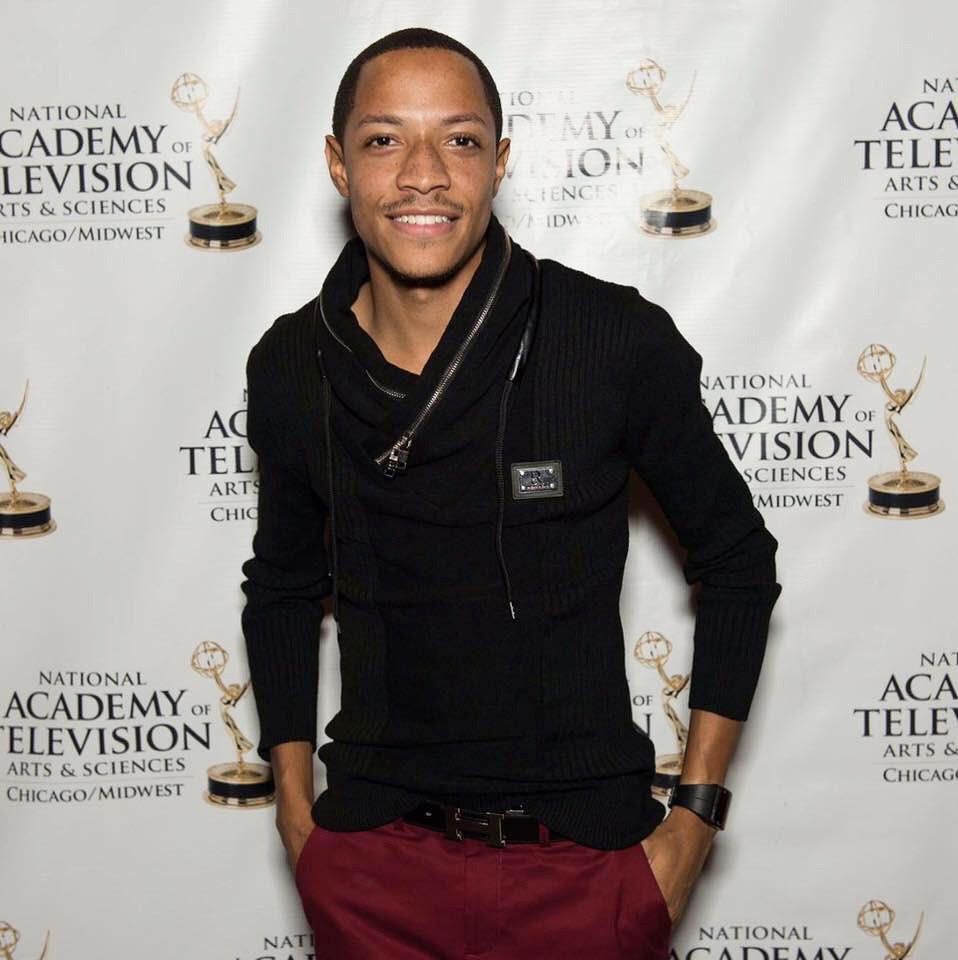 “I would like to humbly thank NABJ-Chicago Chapter for granting me with the $750 scholarship. This could not have come at a better time and from a better organization. I am just one day removed from receiving my Bachelor of Arts degree from Columbia College Chicago after four years of studying broadcast journalism. “Financially, it wasn’t the easiest navigating my way through those years, but I insisted on keeping my focus fixed towards receiving my diploma despite these difficulties. Now that I am a recipient of this scholarship, my future is even more promising than before. I am better prepared and less stressed about the economical burdens that I would otherwise have endured.

“I will be moving on to South Bend, Ind., where I will be beginning my career at WNDU, the NBC-affiliate. I will be reporting and anchoring to the ever-growing Michiana community. Along with this job and being a new graduate, I can also say that I am joining an elite and renowned group through reception of this scholarship.” 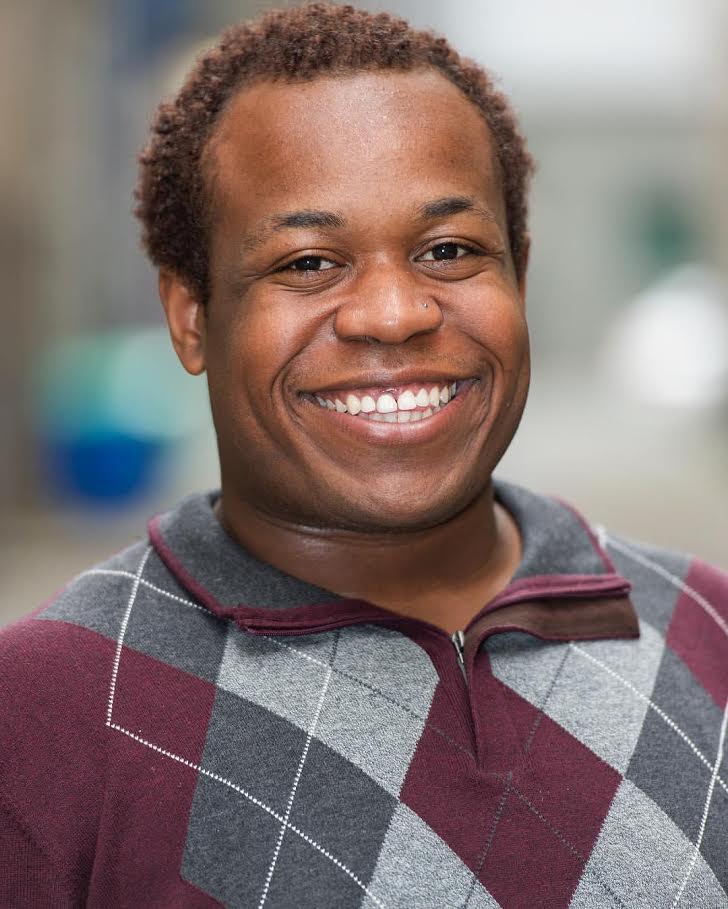 “First off, I would really like to thank the National Association of Black Journalist — Chicago Chapter for the space they provide for both aspiring and current Black journalists. I’d like to additionally thank the chapter for selecting me as the second place recipient for the 2016-2017 Scholarship. It is really refreshing to be supported by folks in the community I’ve grown to love and respect.

“I very recently graduated with a double major in Political Science and Journalism. Afterwards, I immediately moved to New York to begin working as a reporter for the Daily Mail. I actually just got back to America in late December after completing a placement for work in both Glasgow, Scotland and London. Back in the New York office, I started on the News Features desk, and am on the general news desk now.

“I’d really love to be an entertainment/pop culture journalist. I really love the complex pieces that some publications can do, detailing a person’s life. I love New York and I’ve always dreamed of living here. I’ve had the privilege of going to international award shows for work already and I loved the energy and feeling of being around all these people that you normally would only see on television. It is such an honor to be very close to covering the things I love.” 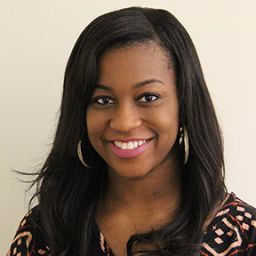 “Thank you for your generous scholarship of $500. I am grateful to be bestowed the honor of representing the NABJ Chicago Chapter.

“I graduated from Northwestern University’s Medill School of Journalism with a concentration in broadcast and print journalism. Last year, I had the opportunity to cover politics in Washington, D.C. and travel to Johannesburg, South Africa with Medill Explores to report on the political climate among the youth post-apartheid.

“As a student, I contributed to the Detroit-based media platform Black Bottom Archives.

“I am passionate about aiding in the progression of communities of color by providing positive representation in the media. I want to help change the way the media reports on underrepresented communities. I am currently job searching and look forward to working in digital media covering the stories that need to be told.” 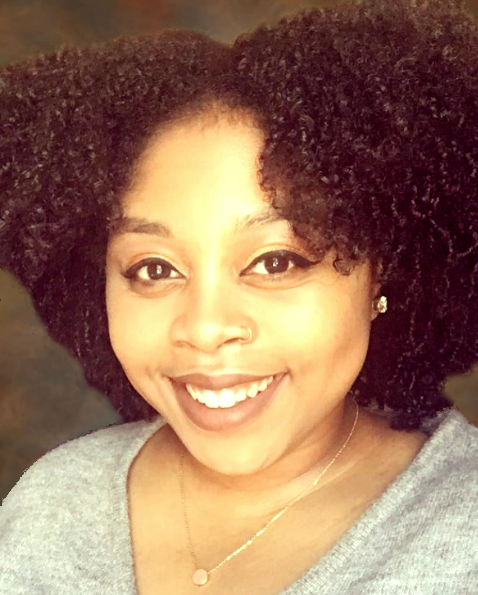 “It is with immense joy that I thank you for awarding me a scholarship towards my Public Affairs Journalism degree. In addition to my Journalism major, I am double minoring in Media Production & Analysis, and African-American & African Studies. “As a native Chicagoan, I am honored to receive this scholarship award from an organization that does so much to uplift and embrace the hard work of Black journalists in Chicago. This award will help me pay my university’s out-of-state student surcharge, purchase textbooks, and tackle the final hardships of my undergraduate career.

“Due to enrolling in multiple college courses at Gwendolyn Brooks College Preparatory Academy High School, I am eligible to graduate from college early, in December 2017. If I do not earn a full-time Journalism job by November, then I will graduate in May 2018. After working for one to two years, I plan to attend graduate school at Northwestern or Columbia universities to sharpen my journalistic skills.

“Last summer, I was one of two students selected out of 300 applicants as a Vice Media and Center for Communication Fellowship Winner. This fellowship awarded me the opportunity to work for Vice Media’s home website as an Editorial Fellow in New York City. This summer, I will work as an Audio and Video Production Intern at Chicago’s first and longest-running podcast, Dynasty Podcasts.” 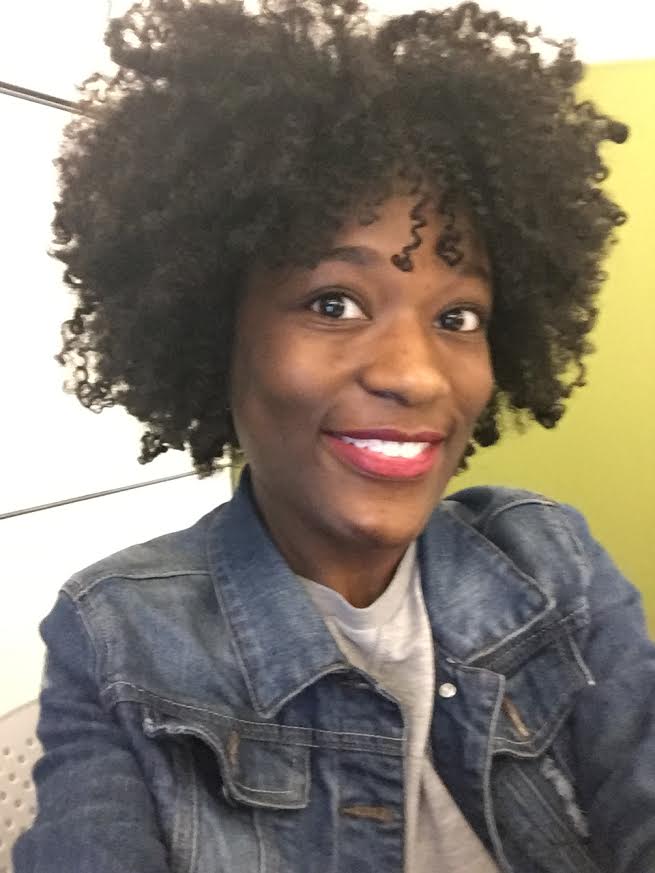 “Thank you, National Association of Black Journalists, for the great opportunity and honor to receive the 2016-2017 Scholarship award. As a journalist and writer working in the Chicago-area, it is an honor to be recognized by the Chicago chapter of the NABJ. I graduated with my degree in Journalism—concentration in magazine writing. I minored in Photography, as well.

“I currently am an Associate Editor for Tighe Publishing, a children’s educational book publisher in Irving Park. I also freelance for Interactive Content Services, based in Chicago. I write legal, educational, government and business stories for various publications around the country.

“I’ve always wanted to write for big media powerhouses, such as Complex and GQ. I would love to start my own magazine at some point in my career, as well. Entrepreneurship and business has always been very important to me. I plan on bringing that idea to fruition in some way in the next steps in my career. Once again, I thank NABJ-Chicago for recognizing my talent and hard work and continuing to acknowledge the power that black journalists have in the media space. Your presence is appreciated and necessary.”

NABJ Chicago congratulates the winners of our 2014 scholarships.  We had to choose from very impressive applicants from universities throughout the Midwest region. Our deep appreciation to journalism school officials and professors at Columbia College, DePaul University, Lewis University, Northwestern University, and Roosevelt University who generously donated their time to narrow the candidates to the final three: 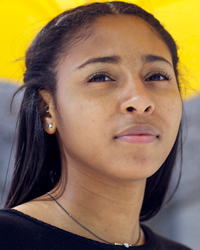 Taylor Shaw, 19, of the South Side Englewood neighborhood, is the winner of our $1,000 undergraduate scholarship. The broadcast student with a 3.3 GPA at Northwestern University’s Medill School of Journalism expects to graduate Spring 2016. Taylor, who attended Chicago’s St. Ignatius College Prep, says her mother, a telecommunications technician, raised her and her siblings to work hard in the pursuit of their dreams and go the extra mile to make them a reality. As early as elementary school, an inquisitive nature led her to want to become a journalist.

While at Medill, where she has learned how to work on-camera and behind the scenes as a producer, she has worked as a video production assistant for the Chicago Tribune, and operated her own blog, www.capturinghumanity.com, that asks the question, “What does it mean to be human?” In Spring 2015, she’s headed to Johannesburg, South Africa to complete a journalism residency at a current affairs show, “Against All Odds”. She plans to attend graduate school for screenwriting, as it is Taylor’s dream to use storytelling “to help people understand that we are all human and therefore, we are all connected.” 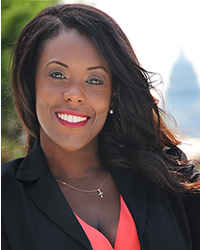 Taryn Galbreath completed her Master’s at Northwestern University Medill School of Journalism in Fall 2014 , with a 3.6 GPA. Often described as a deep thinker driven to get to the heart of controversial issues, this multi-media journalist is committed to public service journalism, with a passion for stories and media that challenge people to think.  A native of Evanston, she attended Evanston Township High School, and says her mother, a divorced secretary, gave her the foundation of “exposure,” as she showered her children with diverse experiences, classes, people and environments wherever she could.

Taryn completed her B.A. and an M.A. in Advertising at University of Illinois Urbana-Champaign, studying  in London and Paris. After working in account management at the Chicago Sun-Times and WGN-TV, Taryn was inspired to pursue journalism. At Medill, Taryn covered health and science, politics and social justice n Chicago and Washington D.C., providing news wire service to such venues as USA Today, Military Times, FOX affiliate, and KVRR in Fargo, N.D. In May 2014, President Obama and First lady Michelle Obama presented Taryn with the Deborah Orin Scholarship at the 100th annual White House Correspondent’s Association Dinner. She says she is thankful to God, her family, mentors, Northwestern, and NABJ as she enters the next leg of her journey. 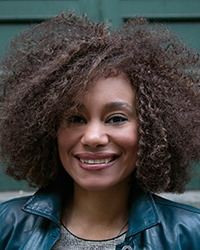 Kiratiana Freelon completed her Master’s at City University of New York Graduate School of Journalism in December 2014,  with a 3.7 GPA. Whether living in N.Y., covering the Olympic Games in Rio de Janeiro or jetting off to Nairobi, she says, she will always be that girl from Chicago’s South Side. Born in Fayettville, N.C., Kiratiana grew up in the Hyde Park/Kenwood neighborhoods; her late father a longtime Chicago lawyer, her mother practicing law for 30 years before becoming a minister in the African Methodist Episcopal Church. She attended Lincoln Park High, then Harvard University, where she studied Economics, wrote for the Harvard Crimson, and helped to publish a Black Guide to Life at Harvard.

After winning a Harvard fellowship to travel abroad, she triggered her lust for international reporting. She’s previously worked for the Hyde Park Herald; taught English in Paris; and spent three years promoting Chicago’s bid for the Olympic Games. She’s also travel-blogged; managed a travel website for American Airlines; and worked in digital public relations, before pursuing a degree in journalism. Spring 2015, she’ll move to Rio de Janeiro, Brazil to work as an international reporter for two years, and invites others to follow her or contact her for Brazilian stories @Kiratiana or www.kiratiana.com

2013 Scholarship Winners:
NABJ Chicago congratulates the winners of our 2013 Scholarships.  As always, NABJ Chicago received a terrific pool of applicants from universities throughout Chicago, its suburbs and the Midwest region.  NABJ Chicago would like to thank the journalism school advisors and professors at Columbia College, DePaul University, Lewis University, Northwestern University, and Roosevelt University–all who helped vet the candidates.