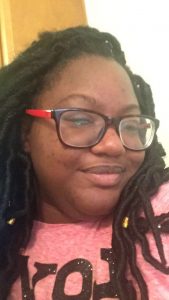 (Editor’s note: Four members of NABJ Chicago paid a visit to the students with True Star Media and Gwendolyn Brooks College Preparatory Academy to talk journalism careers and media issues facing the African American community as part of the chapter’s new Road Show program to visit schools, youth programs and community groups around Chicago. The following article, written by one of the students who attended the session, has been slightly edited.)

Will Jones, Brandon Pope, Phil Thompson, and Dakarai Turner have something in common: They all have studied journalism and became big-time news reporters and writers in their field. Jones is a reporter for ABC 7 News, Pope is a reporter for the WCIU morning show “The Jam,” Thompson is a writer for the Chicago Tribune, and Turner is a reporter with FOX 32 Chicago. All four are members of the Chicago chapter of NABJ (National Association of Black Journalists).

These gentlemen took time out of their busy schedules to visit the True Star Magazine editorial and graphic design After School Matters programs at Brooks High School to talk to us about their careers. We also got a chance to ask them questions to learn more about them and the field of journalism. They covered a variety of topics including the difference between reporting on hard and soft news.

“Hard news is mainly about crime, violence and police brutality,” said Pope. “Soft news is the positive things happening around the Chicago communities like giving back, races for fundraisers and the Chicago Cubs winning baseball games.”

When asked how they get their story ideas, we got a variety of answers. Pope said he gets ideas by “getting out and talking to people about stuff that comes organically.”

Jones said that the thing that helps him is “interacting with people.” He added that, “It also depends on the location and the different types of people that are in that particular location.”

Thompson stated that he gets his story ideas by paying attention to “what people are talking about.”

Turner added that his ideas come from “conversing with people and asking questions to get the information out of them.”

Another very important piece of advice that the gentlemen shared with us was to always network.

Special thanks to all four of these gentlemen for stopping by True Star for a visit. We will be following your careers.

True Star is a media company that provides real-world work experience to youth through the development of their own media.