NABJ Calls Out the Promotion of Misinformation by NewsNation’s Dan Abrams and Mistreatment of Former Board Member - National Association of Black Journalists-Chicago Chapter
12999
post-template-default,single,single-post,postid-12999,single-format-standard,mkd-core-1.0.4,tribe-no-js,ajax_fade,page_not_loaded,,mkd-theme-ver-1.11,vertical_menu_enabled, vertical_menu_width_290,smooth_scroll,wpb-js-composer js-comp-ver-5.5.2,vc_responsive 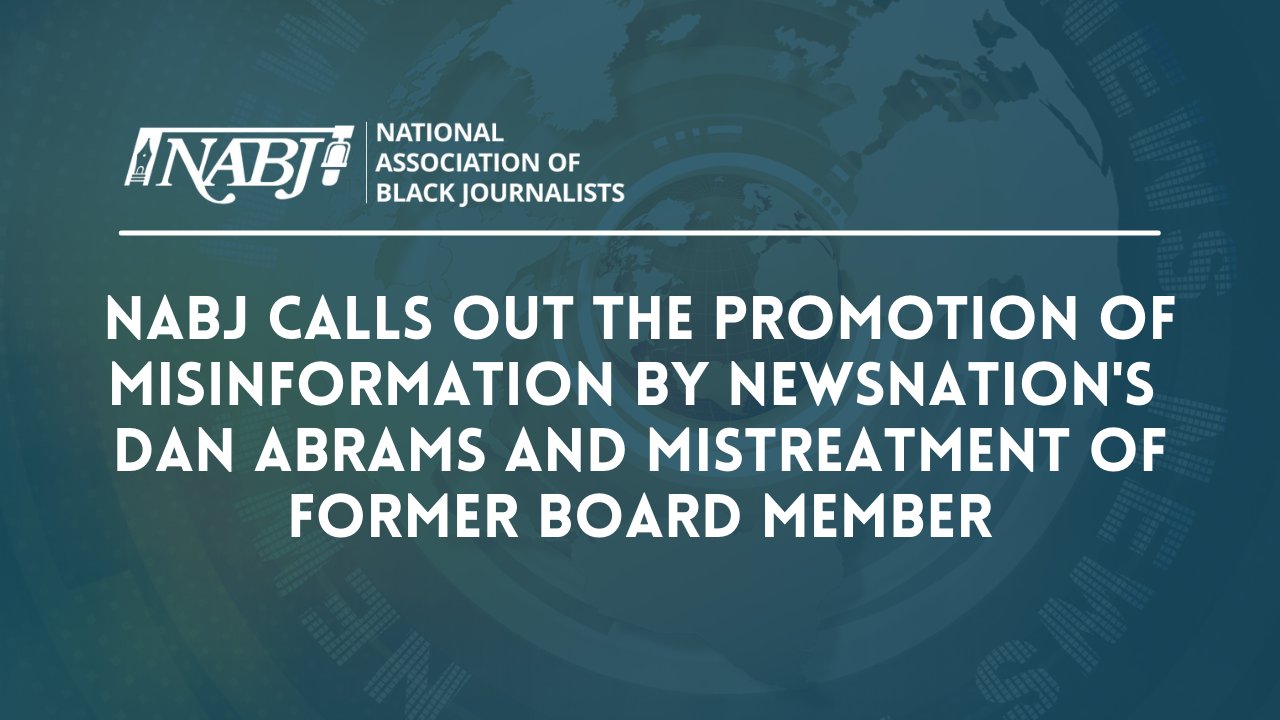 A Statement from NABJ

Fairness in journalism is not just about equality; it is about staying true to the pillars of our field: ​​truthfulness, accuracy, objectivity, impartiality, fairness, and public accountability.

NABJ is disgusted by the treatment of former Board member and NABJ Hall of Famer Roland S. Martin during a recent appearance on NewsNation with Dan Abrams. During the interview, Abrams seemed to abandon the ethics and principles every journalist should abide by. He used social media comments Martin posted about news topics out of context, without sharing the stories that were being commented on with the audience. In fact, it appears that someone on staff could have purposefully cropped out the news stories Martin posted with his comments. This seemed to be an attempt to sensationalize Martin’s social media posts to create a news topic that was not there instead of reporting the facts of the stories about police brutality happening in our communities, which was the stated point of Martin’s commentary.

As one social media user said in response to Abrams’ actions: “This is journalistic malpractice.”

The apparent attempt to sensationalize Martin’s commentary is evidenced by Martin, and viewers, not being able to see the specific retweets Abrams was citing while on air, therefore denying Martin the ability to explain the context of his comments properly and denying viewers the opportunity to hear both sides of the story. Fair and balanced reporting must always be a priority for all news organizations, no matter the audience, platform, or format. A journalist’s personal or political views should not leak over into the coverage they are providing. This is journalism 101.

In a statement, Martin said: “What Dan and his show producers did last night was disgraceful and shoddy journalism….” He added: “NewsNation claims to be a network that will play it down the middle. Well, news leader Michael Corn should tell Dan to issue an on-air correction and apology for his egregious mistake.”

NABJ reached out to Corn, who said, “I spoke to both Roland and Dan. My understanding from both is they will be discussing all of this live on Dan’s show this week.” In response, Martin told NABJ, “I absolutely did not commit to Corn or Abrams to appear on Dan’s show about this matter.”

NABJ is awaiting further response from Corn, who said he was boarding a plane when we reached him, about whether there are steps he’s taking to prevent something like this from happening again. Corn also said in a text, “Feel free to check in after Roland appears on the show.”

NABJ is speaking out on this matter because it is a prime example of the type of misinformation and disinformation that some news organizations and other groups are promoting in order to drive ratings and viewership. This type of behavior is a disservice to audiences and puts a stain on the discipline of journalism, which people rely on for accurate information.

We urge NewsNation, and Dan Abrams, to issue an apology and provide the proper context to its audience.

We call on all news organizations to prioritize combating misinformation and disinformation by providing the proper tools and training and ensuring that there are repercussions for journalists and staff who are using their platforms to misguide or unfairly sway audiences.