25 Years of Impact: Veronique Dodson’s Work for NABJ Has Played a Vital Role in its Growth 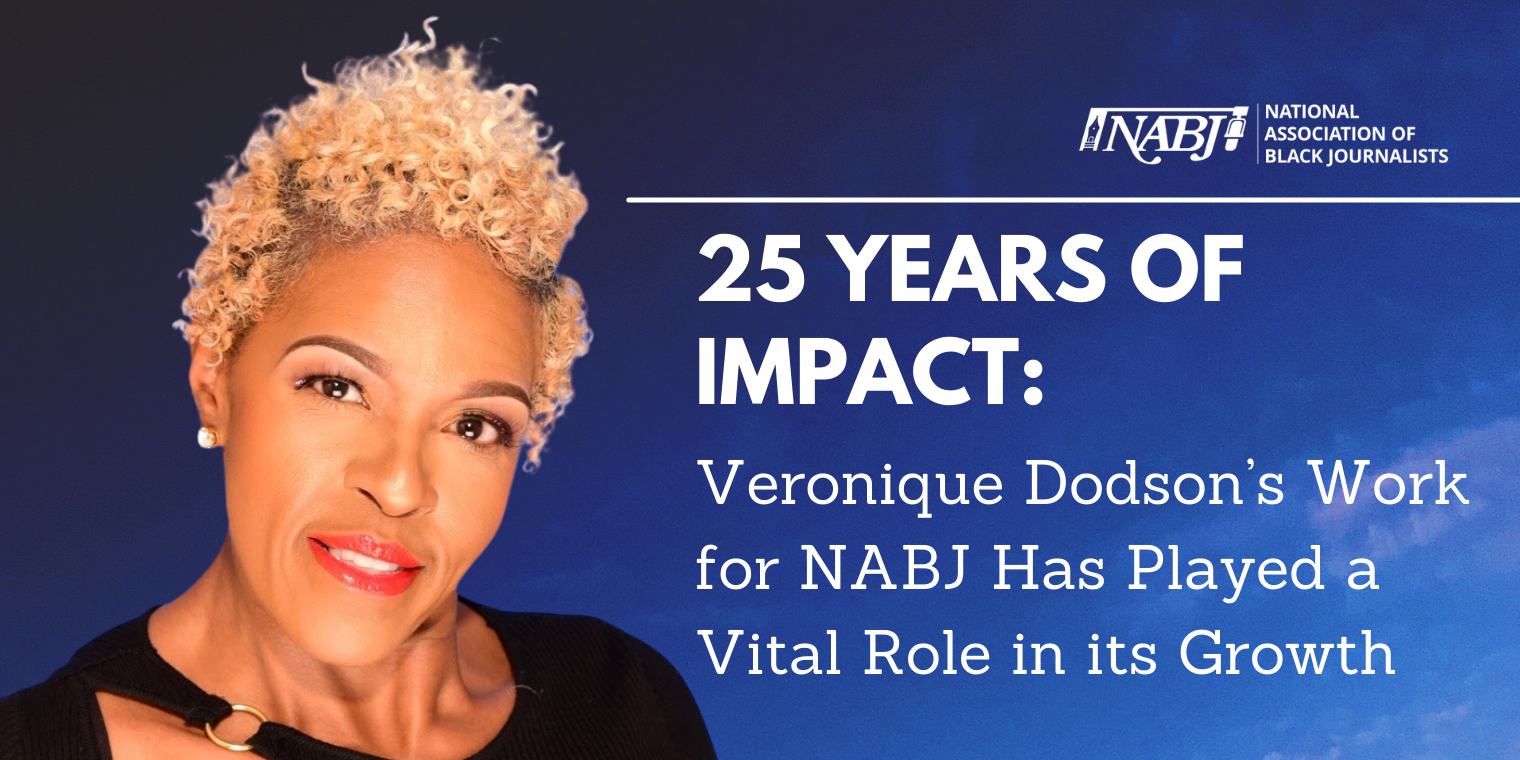 25 Years of Impact: Veronique Dodson’s Work for NABJ Has Played a Vital Role in its Growth

By Kanya Stewart/Director of Communications

In 1995, after being referred by a friend, Veronique Dodson came to the National Association of Black Journalists (NABJ) from a temp agency to help the organization with database management — transferring a physical membership database into a new system.

Her work and commitment quickly elevated her to a full-time employee in March 1996. Twenty-five years later, co-workers, members and organizational leaders are celebrating her for the vital role she has played and the unforgettable mark she has made on NABJ’s legacy.

“Veronique was serving in a temporary position when I became executive director in December 1995,” said JoAnne Lyons Wooten, who now serves as NABJ’s Director of Development. “It only took a few months of observing her skillful interactions with members to determine that we needed her on our permanent staff as the membership services/office coordinator. It was one of the best hiring decisions I have ever made.”

Dodson makes history as NABJ’s longest-serving, full-time staff member. As she worked hand-in-hand with the last 13 NABJ presidents, multiple executive directors, staff, and Board members, she witnessed the news industry pivoting into the digital world and helped to ensure that NABJ did so too. From her first days on the job, and as information technology took center stage, she worked tirelessly to administer the organization’s membership and service management systems with a goal of setting NABJ in a position that allowed it to be prepared for growth, including using new digital resources to attract members and partners from around the world.

“Our office was located in Reston, Virginia in the same building as the Newspaper Association of America. We had a small open suite with one office for the executive director,” Dodson recalled, explaining that she quickly came to love NABJ. “I loved the team environment. After working at NABJ for a couple of months, the staff and I simply fit together like a puzzle. At the time, there were four staffers and the late Carl Morris, our interim executive director. We were a small team but very strong and close like family. We produced and managed so much that members couldn’t believe there were only 5 of us, including Elke Milton, Renee Tross, Allen Blount, and myself. “ 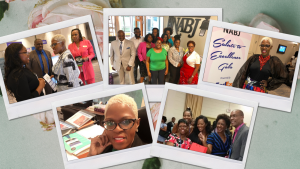 In the 90s, it was Dodson’s hands, along with other co-workers, that completed paper membership cards one-by-one on a typewriter to send to members. She also had to work countless hours to coordinate and manage processes with the local Board of Elections, which at the time counted NABJ ballots and certified the results for elected officials. She also became known as the registration queen — processing thousands of convention attendees’ information by mail every year.

Today, Dodson works just as hard — with the help of technology — to manage multiple online systems that quickly create and deliver digital membership cards, event registrations, election ballots, and partner booth placements for the largest career fair of its kind in the nation. She’s seen NABJ transition from packing up vans with the staff, supplies and volunteers in tow in 1995 for a Philadelphia convention to flying into convention cities and working with advanced logistics and delivery companies to orchestrate NABJ’s renowned annual conventions, an event she has watched grow from 2,000 attendees to over 4,000 in recent years.

“Veronique’s interpersonal skills, willingness to go the extra mile and unflappable presence under pressure have been hallmarks of her NABJ tenure,” said Lyons Wooten, who Dodson credits with teaching her the unique and efficient filing system she is known for today. “She has remained at the vanguard of the myriad technological advances over the decades, and has utilized her skills and knowledge to assist NABJ in ways that extend well beyond her position description.”

There are many contributing factors to Dodson’s ability to adapt and manage so many moving parts without missing a beat. Some would say it’s her expertise, passion for her craft and commitment —  she has even worked a convention just a few months away from delivering one of her three children — and others would say it’s her steadfast faith.

The Woodbridge, Virginia native came to NABJ with a background in database and systems management and was a contractor for the formerly known Mobil Oil Corporation as a database code processor.

Known among the NABJ community for carrying a worn Bible with her wherever she goes (in fact it’s a mainstay at the convention registration area), Dodson says it’s her faith in God that sustains her.

“Without my faith, I don’t know where I would be. My faith keeps me grounded and centered, which is why I keep my Bible forever close to me. It’s my rod and staff, it’s the source of my strength,” said Dodson, recalling how when things may have gotten tense or chaotic at conventions she would quickly say a prayer or read an inspirational verse to bring peace to the situation.

FAITHFUL TO THE MISSION

It is her faith that has also helped her remain dedicated to the NABJ mission, even when the going got tough personally. She’s endured health battles and family losses, which in turn helped her to be a source of strength and comfort for many members.

“I simply try to live my life one day at a time and adjust when change happens,” Dodson said. “Like when my husband of 23 years and my brother passed. I thought I wasn’t going to be able to make it but my faith in God and my family inspired me to not give up. As well as all the kind words of encouragement, hugs and prayers from my NABJ family. When I decided to embark on my journey to better health, I was inspired and encouraged by so many like Sidmel Estes, Bryan Monroe and Dawn Roberts. While I was learning to balance my work and personal life, I was constantly inspired by all the success stories around me. So, I believe that we inspired each other, and I give all the credit and praise to God for placing me in the perfect place at the perfect time.”

Members like Maria A Newman Carrere say Dodson’s presence has been vital to the organization.

“I just want the record to show that Veronique Dodson has been the steady heartbeat of NABJ,” she said. ”Veronique keeps things pumping, moving at a steady pace. And for me, she will always have a place in my heart because she, along with NABJ member and former staffer Ryan Williams, helped me tremendously during the search and rescue of my parents during Hurricane Katrina in August 2005.”

Like Carrere, others have expressed gratitude for Dodson’s positive influence on the membership. Ryan Williams, a longtime member, who has also served on the staff in various capacities over the years, highlighted the special place Dodson has among the community of Black journalists worldwide.

“Consider this: The majority of working Black journalists and media professionals in the United States have interacted with Veronique Dodson at some point in their career,” said Williams. “She spoke to your parents when they were frightened about whether they could afford to send you to J-school and congratulated you on your first NABJ scholarship. She’s confirmed the first of many years of active and lifetime membership, sent an NABJ Award to your office to be opened to the accolades of colleagues, and tallied the votes that confirmed your election to NABJ office. She’s among the first to greet you at the registration booth and the first to mourn your friends and colleagues before informing all of such great loss.”

The connection Dodson has established with NABJ’s members is just one of the many qualities that helped to earn her the prestigious NABJ 2015 President’s Award.

“It meant the world to me to receive the President’s Award from Past President Bob Butler,” Dodson said. “I’ve always felt appreciated, but the award and public recognition brought me to tears. I didn’t expect such a wonderful honor for just doing my job. I will be forever grateful.” 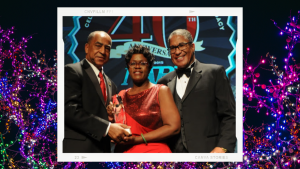 Irving Washington, who worked with Dodson while serving as program manager for NABJ, said Veronique’s true care and concern for members and co-workers made the organization feel like family.

“I’ve called Veronique a sister for 15 years now,” Washington said. “She champions, mentors, counsels, and laughs with me through the ups and downs in life. But, my experience isn’t unique. If you know Veronique, she has impacted thousands of Black journalists across the globe through her 25-year career at NABJ. When we talk about fighting for diversity and inclusion, we often think of people on the front lines. However, Veronique represents the many people in our industry who fight for Black journalists behind the scenes every day. There are so many untold NABJ stories about Veronique — from the times she has helped Black journalists get to the convention who couldn’t afford it to mentoring hundreds of NABJ staffers and interns over the years. Veronique is simply the heart and soul of NABJ’s mission, and she is, indeed, an NABJ sister to us all.”

Former NABJ President Arthur Fennell, who served from 1995-1997, explained that one of the secrets to Dodson’s longevity is her ability to thoroughly analyze situations and execute quick solutions.

“Suffice it to say that my tenure as President, 25 years ago, would not have been as nearly successful had it not been for Veronique,” said Fennell. “ As a newcomer, at the time, in the National Office, her talent, skills and effectiveness made an immediate impact. Simply put, Veronique knows how to get things done. She’s an ace! NABJ can be a tough organization but thank God, she has been a mainstay and a calming influence for us through the many years. Her salute is well-deserved and long past due.”

When asked about what she believes has helped her to stand the test of time, Dodson’s answer came straight from the heart.

“It’s pretty simple, I love what I do and the members that I serve,” said Dodson, noting that one of the hardest parts of her job has been seeing empty seats at conventions where former Presidents and Founders once sat. “Over my 25 years, I’ve met several celebrities and heard many important figures speak, but the moments I treasure the most were meeting and working with our Founders and Past Presidents. I will never forget the hugs and laughs shared with Founder Paul Brock, as well as Past Presidents Chuck Stone, Vernon Jarrett, Thomas Morgan, Sidmel Estes, and Bryan Monroe.”