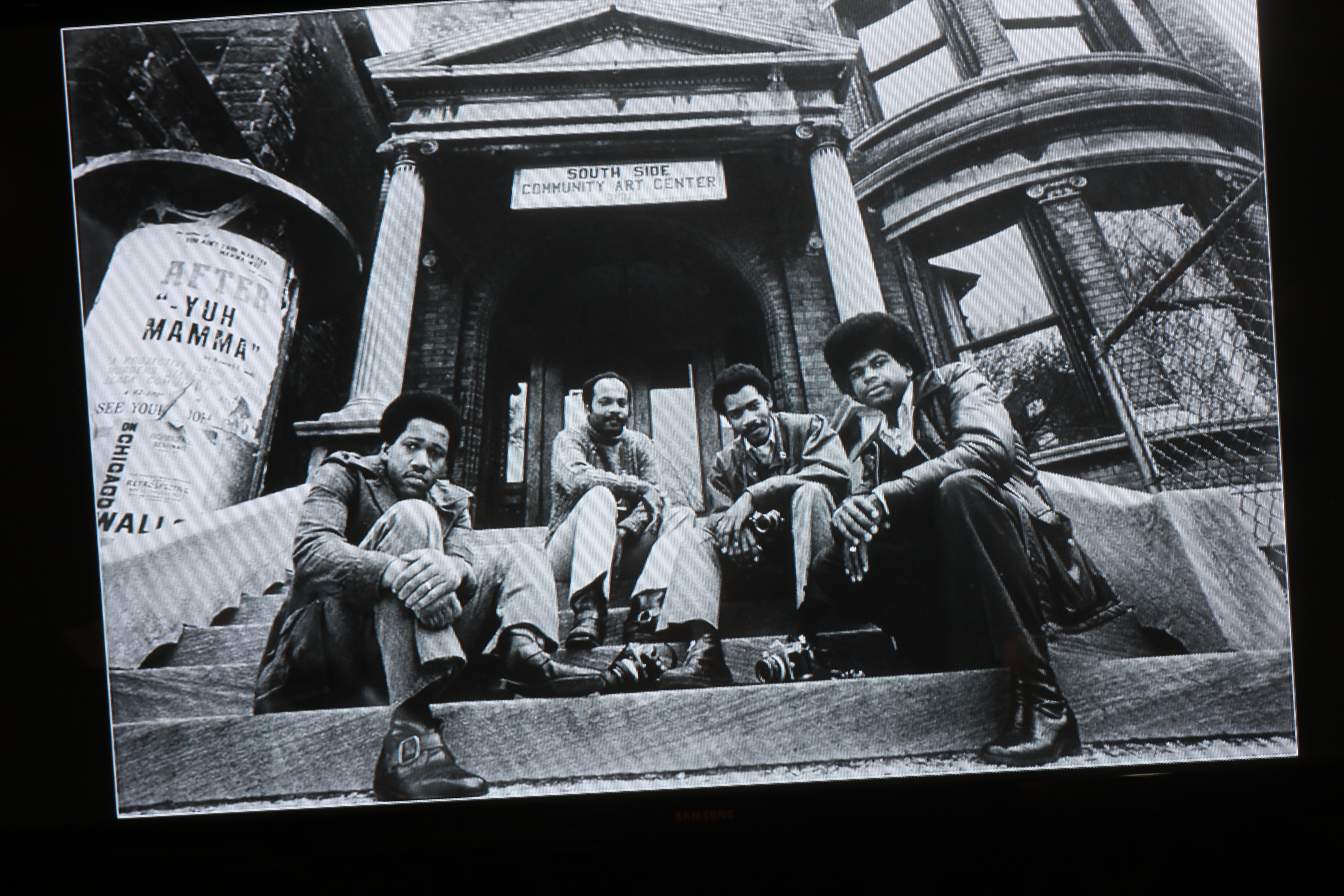 Story by Aisha I. Jefferson

It was a historic event. An education, really.

The trailblazers, among the first black staff photographers to work at major Chicago daily newspapers, discussed their careers, friendship and techniques used to capture some of their best work.

“It’s humbling for me to be in the company of these guys because they’re superb photographers and they’re true gentlemen,” said Simmons, 76, who worked as a staff photographer for Ebony magazine and the Chicago Sun-Times.

Simmons said he started working at the Sun-Times after White, who already worked there, made the suggestion. White’s looking out for Simmons is another testament to the respect the men always had for each other.

“We’re competitors. There’s a harmony that bonds us and binds us. They’re my colleagues but they’re my brothers,” said White, 74, who won the 1982 Pulitzer Prize for feature photography while at the Sun-Times.

No other photo captures this bond more than a selfie the men took in 1973. Simmons, White, Carter and Black positioned a camera on the sidewalk and used a timer to take a photo of themselves on the front steps of the South Side Community Arts Center to promote their exhibit, “Through the Eyes of Blackness.”

More than 40 years later, the men re-created that shot in a poignant, much lauded, time-warp photo. “We wanted to have a signature photograph,” Simmons explained. As photojournalists, the men were often the first ones on the scene, capturing tragedies, celebrations and everyday life for many around Chicagoland. They also turned their lens on key historical moments such as Black’s documenting the aftermath of Martin Luther King Jr.’s assassination.

Nicknamed “Legend” by the other men, Black, 80, began his career in 1965 at the Chicago Daily Defender, and in 1968, became the first black photographer hired at the Sun-Times. A co-founder of the Chicago Alliance of African American Photographers and the NABJ Visual Task Force, Black was inducted into the 2019 NABJ Hall of Fame.

White isn’t the only Pulitzer Prize winner among these photojournalists.

Carter, 73, who began his career as a photographer at the Chicago Tribune in 1969, won the Pulitzer Prize in international reporting with fellow reporter William Mullen for their coverage of famine in parts of Africa and India. Carter also was a member of the Tribune team that won the 2001 Pulitzer Prize for explanatory reporting.

“I had some vision about the kind of photography that I wanted to do. [I had] on-the-job-training and got off to a good start,” Carter said about getting himself hired by the Tribune.

Today, as the widely respected elders in the field, the men continue to mentor, shoot captivating images, and are even contemplating exhibiting their work together again.

”They call us old-timers. I love it now. Didn’t like it at first,” White said.