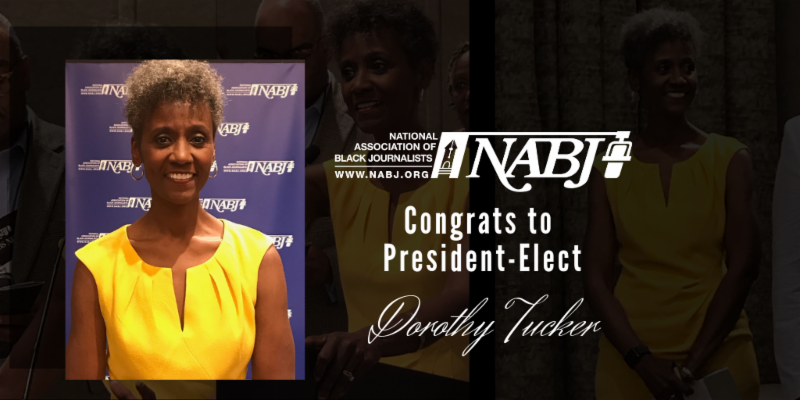 Tucker joined CBS 2 Chicago from KDKA-TV in Pittsburgh, PA, where she worked as a general assignment reporter and talk show host. Prior to that, Tucker worked at KWGN-TV in Denver, CO, REG-TV in Memphis, TN (1979-80). Tucker began her broadcasting career in Peoria, IL. at WMBD-TV, after serving as an intern at CBS 2 Chicago in 1977. Tucker previously served on the NABJ Board of Directors as Region V Director.

“I talk for a living, but I am speechless…I am humbled by your support over the last few months,” said Tucker. “One of the greatest things about running for this position is the opportunity to meet so many members and engage with you. I promise I will earn your vote and respect. I will represent everyone.”

The election results were announced at a 6:00 p.m. press conference following the closing of the polls at NABJ’s 2019 Convention & Career Fair in Miami. 2,102 votes were cast by eligible NABJ members in this year’s election, conducted online between July 1 and 5 p.m. today.

The official results for the 2019 election are as follows:

The association also voted on a number of amendments to its constitution, the results are as follows:

Amendment Proposal 1: A package that includes several recommendations to realign the Board of Directors, including reducing the Board from 14 members to 11. (Members were asked to vote on the Amendment 1 proposal as a package).

YES: 439 votes
NO: 225 votes
*This measure failed because it did not receive approval bythetwo-thirds of the total number of votes cast required for an amendment to be adopted.

The National Association of Black Journalists (NABJ) is an organization of journalists, students and media-related professionals that provides quality programs and services to and advocates on behalf of black journalists worldwide.