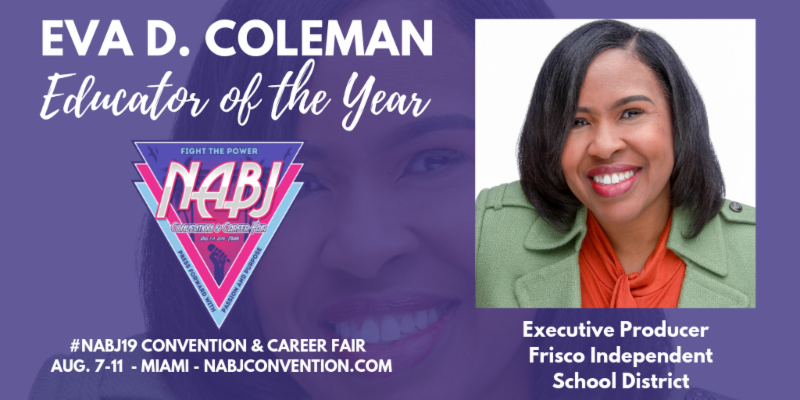 Credited with launching the Frisco (Texas) school district’s first-ever cable television program, Coleman has transformed how students view their role in the media industry. Frisco ISD-TV offers students the opportunity to create and showcase media content for the Frisco ISD community, which includes the cities of Frisco, Plano, McKinney and Little Elm.

Coleman will be honored at the 2019 NABJ Convention & Career Fair Opening Ceremony, which takes place on Wednesday, Aug. 7, at the JW Marriott Miami Turnberry Resort & Spa in Aventura, Florida. Convention registration can be purchased here.

“Eva’s love and dedication toward her students, coupled with her tireless efforts to expose them to the multitude of possibilities in journalism careers personify NABJ’s 44-year commitment to training and development,” said Glover. “Her devotion to her students and Texas’ education system for the last several decades is immeasurable. To know Eva is to love her. I am so glad NABJ is honoring her for her commitment to raising the next generation of journalists.”

Coleman additionally serves as an audio/video production instructor at the Frisco ISD Career and Technical Education Center. The longest-serving high school broadcast media educator in one of the fastest-growing school districts in the nation, she is the former executive producer of Frisco High School’s first-ever television program (RACC-TV), where she served as a broadcast journalism teacher from 2004-2008. In 2010, Coleman went on to create and launch Ranger News Network (RNN) at Frisco’s sixth high school, Lone Star High School.

“Her students love working with her, and she treats them with the utmost respect, which is reciprocated. Ms. Coleman was always able to identify the best in her students while encouraging them to achieve success in the classroom and out on the field,” said Cheryl Smith, NABJ Secretary and publisher of I Messenger News Group in Dallas. “A mentor and teacher, Ms. Coleman is a student of history, society and people. Her students have gone on to receive national awards, just as she has.”

As Coleman continues to positively influence students daily, she also pursues her own passion for journalism. She serves as the lifestyle and culture editor for I Messenger Media LLC, which includes the publications I Messenger, Texas Metro News and The Garland Journal.

More recently, she was appointed to the Texas Education Agency’s Arts, A/V Technology and Communications Industry Advisory Committee. In April 2019, Coleman was appointed to the Student Television Network (STN) Board of Directors for a six-year term of which she serves as the Southwest Region Director.

According to Coleman, being named the 2019 Educator of the Year, who is the first high school educator recipient, is an honor “that takes my breath away.”

“While witnessing and being a part of the enormous growth of high school broadcast media for the past 15 years has come with numerous experiences, the greatest joy is in seeing the countless number of my former students studying at various colleges and universities throughout the country and many well on their way, working professionally in media careers,” said Coleman. “Preparing them [students] for an industry that I love so dearly is my birthright. Ensuring that they understand the complexities and responsibilities that come with documenting the human condition has always been of utmost importance, and the need for NABJ and other organizations that advocate for fairness is intertwined throughout my curriculum.”