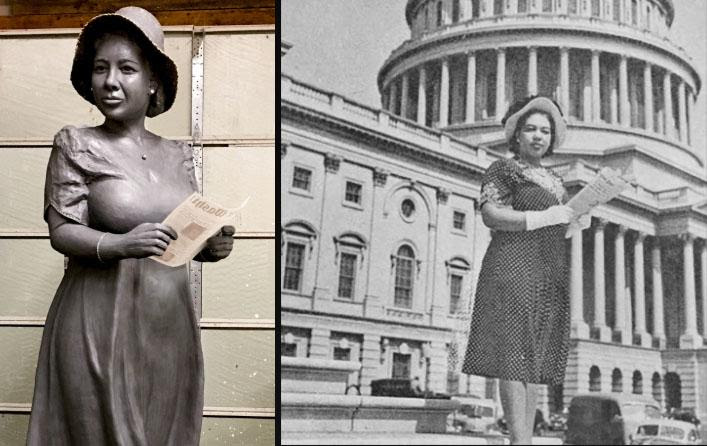 0 Comments
In NABJ National News, News
Washington, D.C. (Sept. 19, 2018) — A life-sized bronze statue of Alice Allison Dunnigan, the first African-American woman to receive credentials to cover the White House and Congress, will be unveiled at the Newseum on Friday, Sept. 21 at 1 p.m.
“Alice Dunnigan, the pioneer and trailblazer, blazed the way for us all and not just black journalist but all journalists. Her story is eerily familiar! I thank God for her and her push for truth. She was shut down from asking questions because she was fierce and persistent in her queries for the culture and the community. I salute you Alice Dunnigan. I stand on your unshaken shoulders,” said April Ryan, 2017 NABJJournalist of the Year and American Urban Radio Networks White House correspondent. “Thank you for doing the job while under stress and underpaid. You are the embodiment of Freedom of the Press!” Ryan went on to say.
Born in 1906, in rural Kentucky to a sharecropper and domestic worker, Dunnigan spent her entire life fighting against racism, sexism and poverty. During her career Dunnigan developed a reputation as a reporter who was unafraid to ask tough questions about race and gender equality, while experiencing discrimination herself, such as being forced to sit with servants while she covered Sen. Robert A. Taft’s funeral or being denied entry to white-only establishments while covering President Dwight D. Eisenhower. Dunnigan famously said, “Race and sex were twin strikes against me. I’m not sure which was the hardest to break down.”
Dunnigan’s time spent covering the White House is recounted in her 1947 autobiography, “A Black Woman’s Experience: From Schoolhouse to White House.” In 2015, University of Georgia Press published an edited version entitled, “Alone Atop the Hill: The Autobiography of Alice Dunnigan, Pionnier of National Black Press.”
“NABJ is grateful that Ms. Alice Dunnigan is being recognized for her groundbreaking journalism as the first black woman to cover the White House. At a time when blacks were living under Jim Crow segregation, Dunnigan emerged as an important journalistic voice and truth seeker,” said NABJ President Sarah Glover. “We celebrate and thank Ms. Dunnigan, a newswoman and White House journalist who broke barriers 70 years ago so that April Ryan, Abby Philip and Kristen Welker can be as fearless today.”
The pioneering journalist began her career at the age of 13, writing one sentence news items for her local paper. To support her and her family, Dunnigan worked as a teacher while taking journalism courses, never letting her circumstances deter her dreams. During World War II, she worked as a typist and freelance writer for the American Negro Press (ANP) before accepting a job with the Chicago Defender. In 1947, Dunnigan became full-time with the ANP and the head of their Washington Bureau, where she secured her historic press pass, allowing her to cover the inner workings of U.S. government for the 112 African-American newspapers that subscribed to the ANP.
Dunnigan worked in journalism until 1960 when she was appointed to a position to Lyndon Johnson’s presidential campaign. She served on presidential committees and in other government roles until she retired in 1970. Dunnigan died on May 3, 1963 at the age of 77, in Washington, D.C. In 2013, Dunnigan was posthumously inducted into the NABJ Hall of Fame.
The six-foot statue is designed by Kentucky sculptor, Amanda Matthews and is based on a 1947 photo of Dunnigan standing on the steps of the U.S. Capitol with a copy of The Washington Post. The statue will be on display in the D.C. museum until Dec. 16, 2018. It then will be installed on the grounds of the West Kentucky African American Heritage Center in Dunnigan’s hometown of Russellville, Kentucky.
“It is so gratifying to see Alice Dunnigan finally being given her rightful place among America’s greatest journalists. Because she endured low wages and myriad indignities to become a political reporter, the little black girls who came after her could stand in the White House on their own authority and question presidents too. As one of those little black girls who walked through the door she opened, I cannot thank her enough for her sacrifices,” said Sonya Ross, Associated Press race and ethnicity editor and chairwoman of the NABJ Political Task Force.
The statue will be on display through Dec. 16, 2018 in the “Make Some Noise” exhibit on Level 4. Following the unveiling, the Newseum will host a program at 2 p.m. entitled, “Remembering Alice Allison Dunnigan” in the Knight TV Studio. Press should plan to arrive at 12:30 p.m. and should RSVP to Sonya Gavankar, director/public relations, at sgavankar@newseum.org.