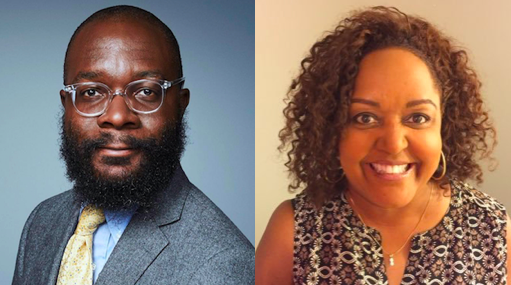 0 Comments
In NABJ National News
NABJ congratulates Sharif Durhams and Cheryl W. Thompson on their historic wins as NLGJA and IRE presidents
Washington, D.C. (Sept. 7, 2018) — The National Association of Black Journalists (NABJ) offers its sincerest congratulations to members Sharif Durhams on his election as president of NLGJA: The Association of LGBTQ Journalists during the organization’s annual convention on Thursday, and Cheryl W. Thompson who was elected president of the Investigative Reporters and Editors (IRE) this summer.
Both presidencies are firsts for black journalists leading IRE and NLGJA.
“NABJ is proud of members Sharif Durhams and Cheryl W. Thompson for their recent elections as presidents of NLGJA and IRE respectively,” NABJ President Sarah Glover said. “As the country’s demographics continue to become increasingly more diverse, it’s noteworthy that NABJ members are stepping forward to take on organizational leadership roles that shape media discourse and the future of journalism.”
Durhams’ historic victory makes him the first African American president of the 28-year-old NLGJA. Durhams, a senior editor for news and alerting for CNN Digital, will preside over the national organization of journalists, media professionals, educators and students advocating for fair and accurate coverage of LGBTQ issues. He has been a member of NLGJA since 2000 and previously served as vice president of broadcast and treasurer.
“My goal is to improve the diversity of this organization as well as it’s outreach,” said Durhams, who has lifetime memberships in both NLGJA and NABJ. “I definitely want both organizations to work more together. In some ways, our issues mirror each other, such as making sure there is support in our newsrooms for diversity and getting people from diverse backgrounds into leadership positions.
“There are ways we can back each other up to make sure all of our voices are heard.”
Prior to joining CNN, Durhams, an alum of University of North Carolina at Chapel Hill, worked at The Washington Post, the Milwaukee Journal Sentinel and the Charlotte Observer.
Thompson, who’s leading the 43-year-old IRE as its first African American president, is a longtime investigative reporter at The Washington Post. She’s also an associate professor of journalism at George Washington University School of Media and Public Affairs. An Emmy Award-winning journalist, Thompson was named the 2017 NABJ Journalism Educator of the Year.
Thompson said she’s committed to ensuring that IRE continues to thrive and excited to collaborate and share ideas with other organizations.
“Investigative journalism is needed now more than ever in this country, and also around the world,” she said. “Being a woman of color, who just happens to be board president, allows me the opportunity to show everyone that IRE is about inclusivity. Our organization should reflect the tapestry of this country, which is not just black and white.”
###
About the National Association of Black Journalists:
An advocacy group established in 1975 in Washington, D.C., NABJ is the largest organization for journalists of color in the nation, and provides career development as well as educational and other support to its members worldwide.