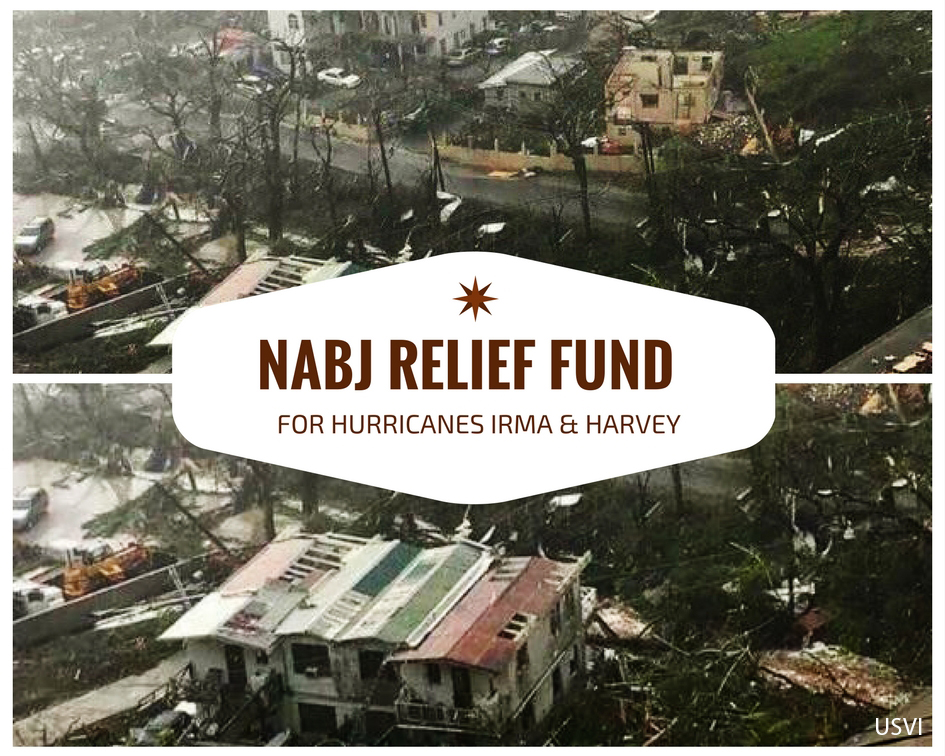 NABJ has established a fund to help NABJ members impacted by the hurricanes. Donations are requested here: NABJ Relief for Hurricanes Irma and Harvey. Those NABJ members directly impacted by the storms may email NABJ Region III Director Ken Lemon at HurricaneFund@nabj.org with appeals and to share detailed information about their need.
President Sarah Glover has been reaching out to journalists and receiving updates from areas that have reported the most damage as a result of the Hurricanes Harvey and Irma in Houston, United States Virgin Islands and Florida.
“We are deeply concerned about the devastation and inconveniences these disasters have caused NABJ members,” said President Glover. “There have been many lives lost, families displaced, and businesses and homes destroyed. But there is hope visible in the communities whiplashed by Irma. This resilience is seen in the news reports documented by journalists and NABJ members.”
The United States Virgin Islands were hit hard by Irma. St. Thomas’ death toll stands at four and at least 40 people are still missing, according to Sen. Marvin Blyden. Unfortunately in St. John, where Hurricane Irma hit the hardest, it’s taking longer to get the proper assessment. USVI has been a longtime partner of NABJ, and a supporter of the Founders Reception at the annual convention since 2011. The tourism department routinely sends USVI journalists and students to the NABJ convention, and NABJ is proud to have USVI media professionals among its member ranks.
“We’re waiting for clearance and an update from the Coast Guard,” said Sen. Blyden, adding that from his own assessment of various areas, the damage is pretty bad. “Every other light post is broken, trees are uprooted, many homes are destroyed or lost the roofs and most cars are severely damaged with broken windows and body damage.”
The senator said emotions are high as many have no insurance and lost everything. And he doesn’t expect the recovery to be quick, inexpensive or easy.
“This was historical in that the winds were high as 225 miles per hour and no one has experienced anything like this,” he explained. “When we were hit by Hurricane Marilyn (1995) it was bad but it wasn’t nearly as bad as Irma. Still it took a year to a year and a half to rebuild. Irma was terrible. Irma was devastating and we don’t know how long it’s going to take to recover.”
As citizens and the USVI government prepare for rebuilding areas that rely heavily on tourism, Blyden says while money is a definite need, the immediate needs are ice, water, generators, batteries, and of course, food. Many have stepped up with donations in the form of clothing, shelter, food, water, and other acts of kindness, but more help is needed and the NABJ would like to target NABJ members who have been impacted, many of whom are also covering the story.
“Many journalists have put their lives in harm’s way to bring accurate coverage to help citizens navigate through dangerous areas,” Glover noted.
Much of the areas affected by the hurricanes are located within the NABJ’s Region III. Director Ken Lemon, along with others, has stressed the need for member support.
“We want support and donations to reach ground zero, where resources will be put to good use,” he said. “There’s so much more help that is needed and it is going to take a while, just as is still the case with those affected by Hurricane Katrina over a decade ago.”
Glover agreed, adding that during NABJ’s Convention in New Orleans in August, members  worked on the homes of some citizens who haven’t been in their homes since 2005. “There is no quick fix for what those who have been impacted are facing. We also applaud the first responders and everyone who is going above and beyond the call of duty. There’s so much to do!”

With Hurricane Jose on the horizon, if needed, those in Jose’s path may be added to the hurricane fund effort. NABJ worked, in 2005, to help aid members who needed assistance after the ravages of Hurricane Katrina.

###
About The National Association of Black Journalists
An advocacy group established in 1975 in Washington, D.C., NABJ is the largest organization for journalists of color in the nation, and provides career development as well as educational and other support to its members worldwide. For additional information, please visit www.nabj.org.