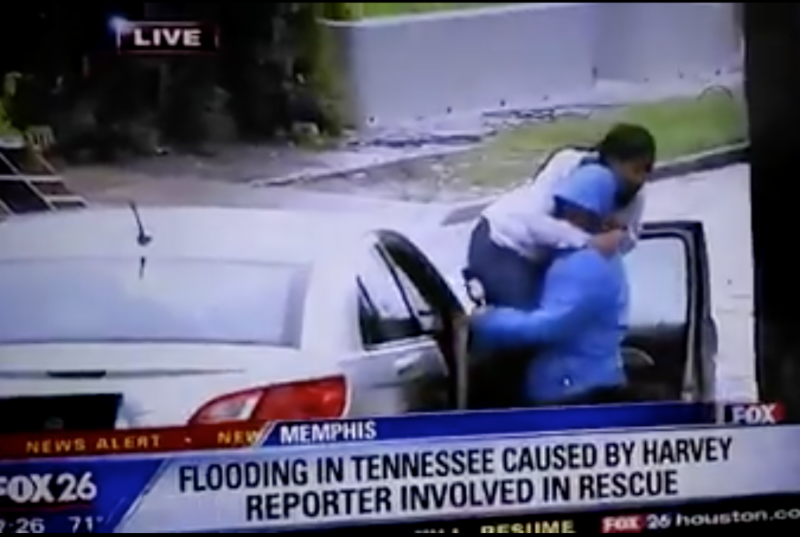 WASHINGTON, D.C. (Sept. 2, 2017) — The National Association of Black Journalists (NABJ) salutes the work of its members and colleagues in the face of disaster. Citing outstanding coverage, acts of heroism and compassion, NABJ President Sarah Glover is calling attention to the efforts of many journalists working under extreme conditions as Hurricane Harvey continues to wreak havoc, not only in Texas but in the region and as far away as Tennessee, Kentucky and Louisiana.
With the Harvey-related death toll reaching 43 at most recent count, President Glover also pointed out the many ways journalists are affected and the toll similar disasters have taken on the industry.
“We have members who have gone above and beyond to provide excellent coverage while also assisting those affected by Hurricane Harvey,” said Glover. “Just like with Katrina and other catastrophes we are seeing professionalism and humanitarianism. Our members are shining and making us proud. There’s no doubt that NABJ cares.”
NABJ members and partner organizations are covering the big story and doing so with humility:
President Glover adds, “We must remember that journalists are people first. We have lives and we are compassionate.”
Social media has called attention to the many stories of heroism displayed by citizens and journalists. There has also been the heart-warming messages from industry leaders like Former National Association of Hispanic Journalists Board Member Rebecca Aguilar, Radio Television Digital News Association Chairman Vincent Duffy and Native American Journalists Association Former President Patty Talahongva.
“This is clearly a time when we should celebrate the good,” said Dorothy Tucker, NABJ Vice President-Broadcast. “Recently, there have been so many assaults on the industry and individual journalists have had their integrity and professionalism attacked. The images and stories are heartwarming and inspiring.”
Marlon Walker, NABJ Vice President-Print, agreed.
“In addition to the many heroic acts, some that are publicized and others that aren’t; there are also the journalists who are donating clothes, money and resources,” he said. “We care and we can show empathy while also doing our jobs. There’s nothing fake about us!”
NABJ understands covering natural disasters can take a toll on those journalists who are working in the trenches and providing the much needed and latest information, all of which is a great service to the community. The past seven days have been exhausting for many.
Journalists and media professionals around the country are continuing to do their jobs and offer aid. NABJ chapter leaders are checking in on colleagues and offering assistance. NABJ Region III Director Ken Lemon and Secretary Cheryl Smith have been reaching out to members and chapters impacted by Harvey. If you know of an NABJ member in need as a result of Harvey, please let Ken know at ken.lemon@wsoc-tv.com.
###
About The National Association of Black Journalists
An advocacy group established in 1975 in Washington, D.C., NABJ is the largest organization for journalists of color in the nation, and provides career development as well as educational and other support to its members worldwide. For additional information, please visit www.nabj.org.